Might & Magic: Clash of Heroes truly deserved to be on mobile.

You see, the Xbox Live remake refined and rejuvenated the much-adored DS original, but the bite-size puzzle-flavoured battles never felt quite right on a TV and controller.

But here it is - like a shape-shifting boss at the end of an RPG, in its perfect final form. It's got all the swish visuals and improvements of the Xbox version, and the portability of agile controls of the DS edition.

The majority of this game is spent on the battlefield, where you'll find a combat system that has much more in common with Bejeweled than any Might & Magic game.

You command a huge army of coloured troops - knights, archers, bears, skeletons, and assassins - who can be shuffled about the bottom half of a grid-like battlefield.

If you match three units of the same type and colour in one column, they'll form a phalanx and attack the opponent in a future turn. Or, match them horizontally and they'll morph into a defensive wall.

There are also elite units - including reindeer-like druids, and knights on horseback - who need to be matched with a pair of same-coloured units to attack. Champion units - like killer trees and acid-spewing dragons - require four.

There are some tactics that are simply lifted straight out of a puzzle game.

If your shifting troops cause a trio of units to stumble into formation - like how a Tetris Attack match might cause a second lot of blocks to slot into line in chain reaction - you'll get a free move.

That's just an executive summary - all told, it's a dense and involving battle system. But it's delivered on such a gentle learning curve that no one will get left behind. You don't need to be a master tactician to pick it up.

Oh, and it's exceptionally fun, forcing you to think several moves ahead, weigh up offence and defence, and keep a watchful eye of both sides of the battlefield. It's a rewarding and hazardously addictive setup.

These battles are sandwiched between more traditional RPG events.

You'll hop about on painterly backdrops, in the whimsical fantasy world of Ashen, as you go about avenging your family or whatever. The story is humorous and often quite dark, but it's not particularly engrossing.

Your movement is restricted to nodes on the ground. It does make it feel like a slightly linear succession of battles. But there are sidequests, and you can backtrack to stock up on elite units, or retry missions you struggled with earlier.

Three in a row

Clash of Heroes is bursting at the seams with content. Alongside that enormous 20-or-so-hour campaign you've also got a full multiplayer mode with pass & play, head to head (on iPad), and competent asynchronous play.

But it's not without the odd annoying bug. You might find yourself stuck in an unresponsive menu from time to time, forcing you to reboot the game.

All in, Might & Magic: Clash of Heroes is a truly spectacular game. It's got a massive RPG world to explore, and some of the most smart and engrossing battles you're likely to find on the App Store.

It's also the best version of the game yet - more beautiful than on DS, and with better controls and multiplayer than on XBLA.

If you've never played either before then, boy, you are in for a treat. Clash of Heroes is pretty much an essential purchase for any fan of puzzle or RPG games. 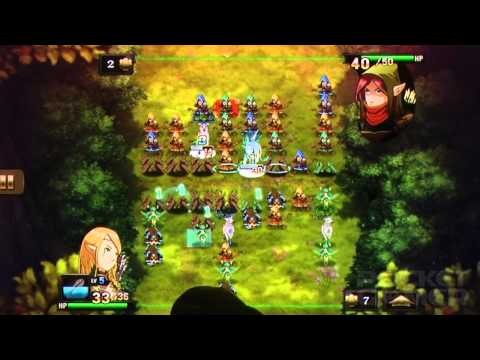 Clash of Heroes is a monstrous RPG with beautiful graphics; a suite of multiplayer modes; and some of the most smart and addictive battles around
Next Up :
UFO99 review - "A fun little arcade game on the go"

Might & Magic: Clash of Heroes is dirt cheap on iOS and Android at the moment

Battle through a 20+ hour campaign in Might & Magic: Clash of Heroes for Android

Ubisoft hacks away at the price of Gold Award-winning iOS game Might & Magic: Clash of Heroes

Puzzle RPG Might & Magic: Clash of Heroes will enchant the App Store at midnight