It's a question we've all asked ourselves. Just how would Metal Slug work as a free-to-play tower defence game?

The answer provided by Metal Slug Defense, which is out right now on the App Store and the Google Play Store, is that it'd actually work quite well.

The game lifts the fundamental chunks of the Metal Slug universe, from the gorgeous retro graphics to the overblown violence and huge tanks, then slots them all reasonably neatly into a more strategic template.

There are defensive units that let you build barriers to keep the opposing force occupied, and you'll unlock some familiar faces as you fight through the game. 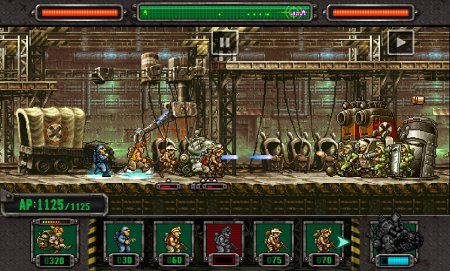 Units have special attacks that can be used when they're glowing blue, and the game even manages to transpose the huge boss fights that made the original series so memorable into the new format.

After playing through the tutorial you'll unlock a multiplayer mode that lets you scrap it out against a friend across a WiFi network as well.

It might not be perfect, and as it's free-to-play some of you are going to find it a bit icky, but Metal Slug Defense is still worth a look.

You can grab it right now for nothing from the Google Play Store [download] and the App Store [download], and while it might not be the Metal Slug you know and love, there's still a lot to like about it.