In Replay, we take another look at the handheld and mobile games that have defined genres and pushed boundaries. This week, Mark Brown dives headfirst, and in slow motion, towards Max Payne's first handheld release.

You only have to look at Rockstar's mangled iPhone port of Max Payne to realise that some PC games just don't work that well on handheld.

The cramped screen, the modest performance, and the shortage of buttons means that most computer games just don't play nice in portable form.

But that didn't stop Rockstar from trying. In 2003, Mobius Entertainment (now Rockstar Leeds) managed to squish Remedy's action-packed noir epic into the cramped confines of a Game Boy Advance cartridge.

Against all odds, it didn't completely blow.

That's mostly down to the game's handheld-friendly visual style. Instead of a third person shooter, Max Payne on GBA is viewed from an isometric perspective, making it look like the world's most violent and grubby version of The Sims. 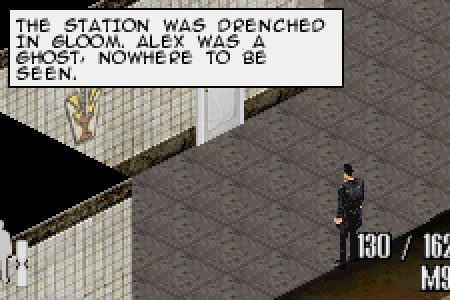 You still catch a ride on a rundown subway train, still chase enemies across snow-capped rooftops, and still blow your way through a bank with the help of some leftover C4. Almost every chapter (bar the iconic dream sequences) is remade for the GBA port.

Having just played through Max's first two acts for our review of Max Payne Mobile on iPhone and iPad, it was slightly uncanny to see huge swathes of the original game remade in the pixelated, isometric style. It certainly helped me find the enemies who are hidden off screen by the restrictive camera angle.

Most impressively, even the graphic novel panels are intact - complete with voice acting. Okay, so the voices are so garbled by the GBA's crackly phone-line soundchip that most bits of dialogue are barely audible, but it's quite the feat, nonetheless. 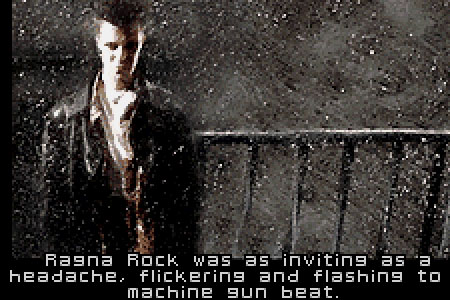 Remarkably, almost nothing was censored in the leap to GBA. Nintendo had obviously relaxed it's adult content rules by the time Max Payne released, and forgot about the strict standards policy that had crippled many PC ports in the past.

That includes LucasFilm having to expunge any sexually suggestive sentences from the NES version of Maniac Mansion, or id Software turning Wolfenstein's Nazis into green-blooded zombie soldiers on SNES.

Nope, this game wears its "16+" rating sticker with pride. Enemies explode into a shower of blood, leaving pools and splatter stains of the stuff on nearby floors and walls.

Nintendo's long held prudishness didn't even affect the sex motel level from Chapter 3, where tiny pixelated beds judder up and down when you push the love-heart-shaped button nearby.

Plus, racy pin-up posters still adorn the motel's walls, and when you stumble upon Rico he's still being "entertained" by a lady friend (and you'll still chase him down a corridor, with his trousers around his chubby ankles).

It's all a long way from the Nintendo who had a strict ban on the word "kill". 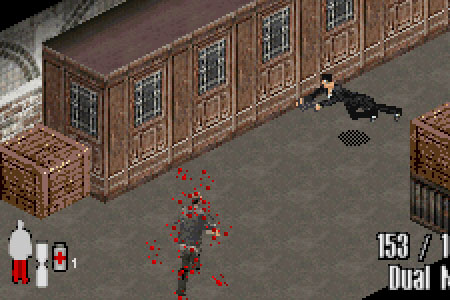 Max Payne for GBA was actually quite fun to play. Showboating revenge-killer Payne can launch into bullet time dives with a jab of the right shoulder button, and you can reposition his body while soaring through the air to take care of multiple foes.

You've got a big arsenal of guns to work with, and a pocket-full of painkillers to top up your health.

Navigating the isometric rooms with Nintendo's four-pronged d-pad certainly took some getting used to. But it was a visual and control style that was used quite often on GBA - like launch title Tony Hawks Pro Skater 2 (which was almost as faithful to its big-screen brother as Max). The short, four-hour playtime was a bit of a bummer, too.

But in totality, Rockstar and Mobius managed to do a pretty wonderful job of bringing Max Payne to portables.

The GBA could never have handled the PC shooter, and any attempt to squeeze the game onto Nintendo's three-inch screen would have been a bloodbath to rival's Max Payne's fateful afternoon.

But by focusing on the strengths of the platform, and being uncompromising where it mattered, this handheld remake ends up being a memorable little game.

Max Payne Mobile is on sale, updated with MFi controller support and enhancements for 64bits devices

8 games that should never have come to mobile

Max Payne Mobile finally makes it to the Xperia Play

Max Payne Mobile gets Tegra 3 optimisation - out today on Tegrazone