Luftrausers isn't a perfect game. And I'll get to that. But there's no escaping the fact that Vlambeer's sepia-toned dogfighting game is incredibly fun to play.

Alongside the impeccable Spelunky, Luftrausers is - when at its best - among the most enjoyable experiences you can have on Vita.

When you're on a good run, threading through a tight weave of bullets, pirouetting in mid-air to swat a nuisance fighter jet on your tail, swooping into the ocean to dive-bomb a boat, juking to outsmart a battleship's guns, and nursing a fragile MAX combo, Luftrausers momentarily becomes the best game you've ever played. 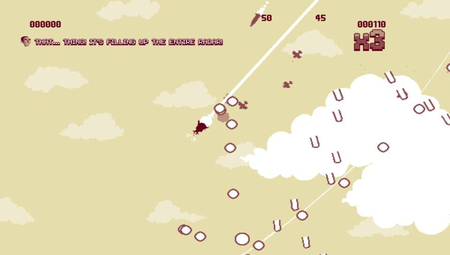 It's not quite bullet hell, but it certainly comes close

It's a dizzying, mesmerising, frenetic dance to a death. A wicked smart balancing act of attack and defence. A white-knuckle thrill ride through the sky. And there's that catchy electronic riff.

It takes a while to get to that point, mind you. This isn't a game you learn so much as one you master. The manic pace, rampant difficulty spikes, alien physics, and tricky controls all conspire to kill you within about five seconds of your first go.

Every attempt starts the same, though. You take off into a sparse sepia battlefield and try to kill as many boats and rival planes as you can before you're inevitably blown to pieces.

There are some tactics invoved - you only heal when you're not shooting, and a combo meter keeps ticking as long you're killing - but, largely, it's just about evading bullets and filling foes with your own. 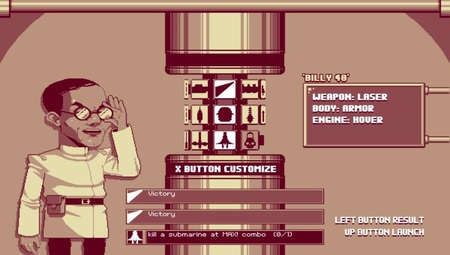 The menu is smartly designed, so it's always easy to have another go

Like in Spelunky, nothing really changes here between your first embarrassing run to your later high-scoring displays of aerobatic elegance and ruthless mid-air murder.

Sure, you unlock new weapons, bodies, and engines. Each has drawbacks as well as advantages, though. The hover engine flies in the face of gravity but suffers slow acceleration. The bomb body drops mini-nukes but regenerates health slowly.

Put these bits together and you'll find some 125 different combinations, each with its own name and distinct pixel shape. Some loadouts encourage kamikaze head-on collisions with foes. Others are speedy. Some are defensive.

It will take some experimentation, but you'll eventually find one that suits you. (For what it's worth, I'm partial to the laser beam, armoured body, and hover engine). 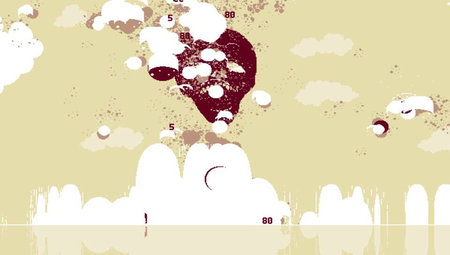 The nuke body kills everything on-screen when you die, which is handy for some missions

As you work through the game, you'll find that there's not all that much to see. There's only one arena, and just eight types of enemy to defeat.

Working through the increasingly enormous foes is a satisfying pursuit, yes. After that, though, you'll be repeating the same loop again and again as you work through 100-odd missions.

These addictive bite-size objectives might involve killing a bunch of jets in one run, hitting a certain score threshold, smashing up ten enemies without firing a shot, or blowing up eight boats in one combo. Each is linked to different parts, forcing you to try different loadouts instead of relying on just one.

And, of course, there are leaderboards if you want to compete with your friends or the world for a top score. Sadly, they're hidden in a sub-menu when they really should be plastered on the main screen.

But a lack of content doesn't alter the fact that playing Luftrausers simply feels fantastic. And pretty much everything you do - whether it's earning a leaderboard-worthy score or finishing off the game's boss - will rank among your most satisfying gaming moments of the year.

What Luftrausers lacks in sheer amount of stuff, it makes up for by being a finely crafted thrill ride of satisfaction and fun
Next Up :
Pawnbarian review - "A minimalist roguelike that's hard to put down'"