Swooping onto the App Store at midnight tonight

At midnight tonight, Level-5 will launch its anime-style shmup Liberation Maiden on the App Store.

This inbound iPhone and iPad game was originally developed by No More Heroes and Killer7 auteur Goichi Suda as part of the Guild01 compilation for 3DS.

And it's suitably nutty.

You see, Liberation Maiden takes place 100 years in the future, where the teenage President of Japan personally defends her nation from attack in a rocket-powered robot suit.

It's all about wiping out waves upon waves of baddies, using lock-on lasers and evasive manoeuvres. There are also enormous screen-filling boss bots, called Conduit Spikes. 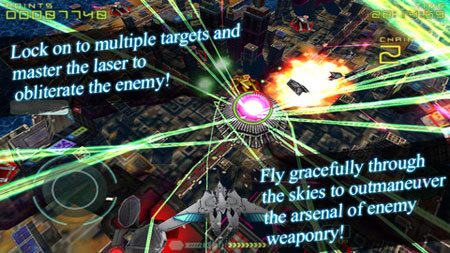 Shadows of the Dumb

As good as all that sounds, we were left somewhat disappointed by the 3DS version of the game.

Our resident Suda superfan Peter dubbed it "hard to play, unexciting, and a little soulless". He concluded his review by stating that "this is undoubtedly Suda 51's worst output to date".

If that doesn't put you off, Liberation Maiden will hit European and North America App Stores at midnight tonight. It will cost ya £2.99 / $4.99.

Subscribe to Pocket Gamer on
Launch trailer for the Nintendo 3DS edition
Next Up :
Madness/Endless is a gory stealth action game with hardcore difficulty and vivid pixel-art visuals, out now on mobile