3DS + PS Vita
| Lego The Lord of the Rings: The Video Game

A playable demo of Lego The Lord of the Rings appeared on the US Nintendo eShop, and it confirms one suspicion we had since the game's announcement back in June: it features fully-voiced dialog from the movies.

Similar to Lego Batman 2: DC Super Heroes which offered full voice acting (a first for the Lego franchise), Lego The Lord of the Rings uses dialog from the popular movies in the cutscenes before and after each playable level.

Unlike Lego Batman 2, however, Lego The Lord of the Rings uses the dialog as recorded by the actors themselves, creating a great sense of unity between the game and movie experience.

One demo to rule them all

The demo is set during the events of the Ringwraith attack on Weathertop in the first film. Players have the opportunity to control Frodo, Sam, Merry, and Pippin with Aragorn making a guest appearance at the end.

Players encounter familiar, character-specific environmental puzzles during each section of the level. Samwise can plant seeds on tilled earth, start fires with tinder, and dig on certain spots, while Merry can fish up objects from streams and pools.

Pippin has the ability to throw objects at targets, and Frodo can use the One Ring to interact with 'wraith objects'. As always, players can toggle between playable characters throughout a level.

Based on the demo, Lego The Lord of the Rings doesn't seem to be taking itself too seriously.

Many Lego game purists worried that the addition of movie dialog would distract from the 'Lego vibe' of the game, but thankfully the presence of now-famous movie dialog serves instead to enhance the gameplay experience by providing the Lego characters something to act against.

As Aragorn delivers a breathy warning about the severity of Frodo's stab wound, for example, Merry and Pipping gambol about in the background with a Lego stretcher whilst wearing nurses's hats.

With luck, the finished version of the game will stay true to the 3DS demo. If so, Lord of the Rings and Lego fans will be looking forward to a very Merry holiday season indeed. 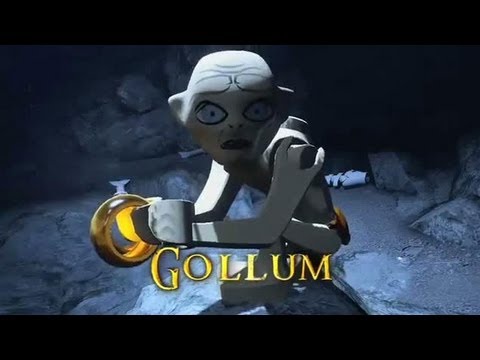 Lego The Lord of the Rings

Lego The Lord of the Rings: The Video Game