Our team on the scene over at this year's GamesCom in Cologne have been living it up with the krazy kids of Konami, who've been eager to talk about their forthcoming cartoon racer, Krazy Kart Racing.

When the App Store first kicked off, this type of Mario Kart-esque racer was all the rage, but lately all we've been seeing a photo realistic driving simulators (which are being great, of course, but a bit of cel shading is always welcome). Konami has therefore stepped into the breach to bring us a new addition to the cute cars and characters cadre.

"We have deliberately kept [Krazy Kart Racing] under wraps for a while to surprise the audience at the most important European game show," explains Florian Stronk, Head of the Network Business Development Department for Konami Digital Entertainment.

Just because it's a cartoon racer doesn't mean the driving mechanics and gameplay features are any less impressive, however. Krazy Kart Racing brings ten classic Konami characters to the track across 16 themed circuits.

The game promises a 'dynamically balanced camera' to help you stay focused while powering around the tracks using your Nitro boosts, and offers both single player and multiplayer racing.

"It’s another fun-focused title, which combines Konami’s rich IPs and use of the best developer talent in Europe, including our external partner Polarbit. We look forward to people getting to grips with it, either here at gamescom in Cologne or wherever they choose on their personal device," Stronk concludes.

Krazy Kart Racing it is expected to be with us on the App Store later today at £5.99, so get your engines revving. 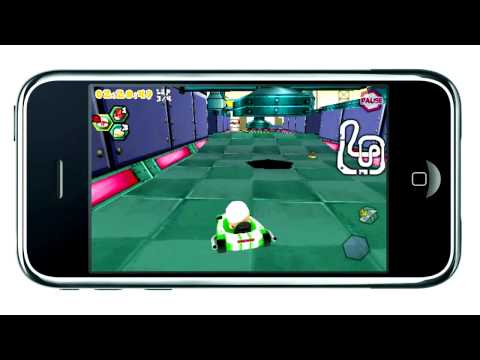