If you're the kind of person who can't multitask for toffee then you may want to give King of Dragon Pass a wide berth.

Ported from a cult PC game released in 1999, this unique adventure manages to combine elements of strategy, role-playing, and resource-management, and is both intensely rewarding and sadistically punishing at the same time.

Before you get into the nitty-gritty of the game's main Quest mode, you have to wade through a staggering amount of backstory, which explains the history of the world of Glorantha and where your clan fits into the grand scheme of things.

Thankfully, you're not just a hapless spectator during this extended exposition – you must make choices at certain points which have wide-ranging consequences on how the game plays.

For example, you have to choose whether or not your ancestors took slaves, which god they chose to worship, and whether they accepted a dragon into their clan or turned it away.

Your selections here shape the attitudes of your people in the main game, but what the developer is keen to stress is that it's impossible to pick the 'wrong' choice. Each decision results in different challenges further down the line, but none of these variations means an instant Game Over.

After you've waded through the lengthly introduction sequence, you're dropped into the game proper. Here, King of Dragon Pass betrays its personal computer roots.

The screen is crammed full of text and menus, and the first time you play you're guided by an exhaustive tutorial which explicitly tells you what you should do next.

Such hand-holding may seem overbearing, but in the case of King of Dragon Pass it's required. This is a game with an astonishing amount of depth - you have to decide how your clan divides its resources, farms its land, and interacts with neighbouring people.

Random events punctate the gameplay, and these will sorely test your understanding of how the game works.

For example, you may receive a demand from a nearby clan for a valuable resource, such as cattle.

If you're in a particularly belligerent mood you may spurn this advance, but by handing over the animals you're ensuring that your rival is indebted to your clan – which could prove handy in the future, when other rivals appear and you need allies.

A different game every time

This example is just scratching the surface of King of Dragon Pass. There's a seemingly endless selection of random events to experience, each one making the game play a little differently from previous sessions.

The scope of the game is so overwhelming that you need to make sure you read the massive instruction manual at least once. This might seem a little odd in this instant-gratification era of Angry Birds and Tiny Wings, but King of Dragon Pass is not what one would consider to be casual entertainment.

Another obstacle for players is the presentation. King of Dragon Pass doesn't contain any animation to speak of, although there are hundreds of still, hand-drawn images to appreciate. Most of the game you'll be staring at text-based menus, and it's hardly what one could call eye-catching.

In for the long haul

Despite its intimidating level of complexity, King of Dragon Pass is very well-suited to the iOS platform. It's the type of game that requires your undivided attention, but can be played in short bursts as well – the action only proceeds when you're ready, so you don't have to worry about missing a vital event.

It's clear that King of Dragon Pass isn't going to be to everyone's tastes, and its steep price point will do much to dissuade those who are initially put off by the static graphics and abundant text.

However, if you have the patience and time to devote to it, King of Dragon Pass is virtually guaranteed to pay you back the download price several times over in enjoyment. 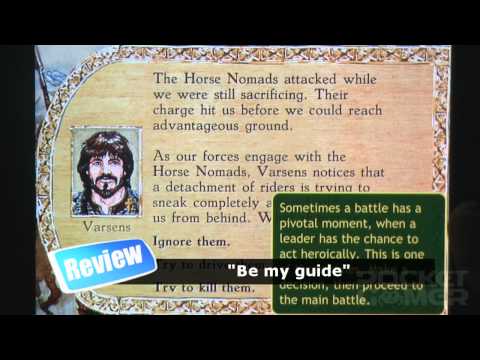 A wholly unique adventure that has no equal on the iPhone, King of Dragon Pass makes up for in depth what it lacks in accessibility
Next Up :
Hero Emblems II review - "Lovely visuals and music, but match-3 combat lacks strategic depth"

A Sharp slashes price of King of Dragon Pass as it surpasses 30,000 downloads on iOS