HeroCraft is in the process of porting its Silver Award-winning iOS fantasy strategy game King of Dragon Pass to Android, Windows Phone, and Vita.

HeroCraft made the announcement on the game's Twitter account, where the studio also revealed that the game should go live on those platforms in Q2 2014.

King of Dragon Pass started life as a PC game in 1999. It then came to iOS in 2011. It combines strategy with a Choose Your Own Adventure-style of play.

You take on the responsibility of guiding a tribe as it expands its territories and goes about surviving in a harsh fantasy land. 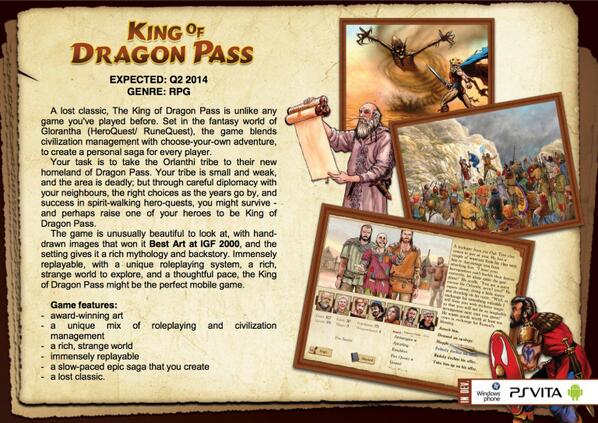 In our review of the game, we said: "A wholly unique adventure that has no equal on the iPhone, King of Dragon Pass makes up for in depth what it lacks in accessibility."

We'll let you know about concrete release dates for King of Dragon Pass on Android, Vita, and Windows Phone as soon as we get wind of them.

Eurogamer
Next Up :
Daily Dadish lets you try and save your missing radish kids one day at a time, out now on mobile

A Sharp slashes price of King of Dragon Pass as it surpasses 30,000 downloads on iOS