Our community puts it to the test

If you're after a truly tough-as-nails top-down shooter to keep your evenings busy, JYDGE is one to keep an eye on. After already making tracks on Steam and consoles, it's finally time to put it to the test on iOS.

Is it any good, though? We've called in our App Army to help us explore and answer that question.

JYDGE is an interesting game that doesn't take itself too seriously and I can see this could be a lot of fun given some physical controls. However, on my phone the game was frustrating as hell to play exaggerated by the small mobile screen and cluttered virtual icons.

The game is pretty easy which led to most errors blamed on the poor controls rather than actual challenging gameplay, but the short missions lend them self to quick mobile play. I now have eye strain and RSI but wouldn’t hesitate to give this another go on a more suitable platform.

As the old saying goes 'Dead or alive, I am the law' or something like that. JYDGE is quite blatantly inspired by both Robocop and Judge Dredd with a bucket load of pop culture references thrown in too. I can't think of anything bad about that and would challenge anyone else to.

The gameplay's your standard twin-stick shooter affair with the added fun of destructible scenery. While the music is good, the limited number of tracks ends up sounding repetitive.

What shines for me is the upgrade system, unlocking a certain number medals by completing tasks gives you accesses to various goodies, from different ammunition to cyberware which can radically change your playstyle. Thanks to some great level design you can go in guns blazing or take a slower stealthy approach depending on what equipment you choose.

JYDGE is a moreish game with that elusive 'just one more level' factor, if you're a fan of shooters it would be criminal not to give this one a try.

Don't feel like you judge people enough? Feel like taking on the role of a super police officer that judges people simply by killing them? Then this might be the game for you. A top down view game with simple graphics and intense music make for an interesting game. It feels very similar to a lot of other games out there and can be a little repetitive at times, but as far as these type of games go, it’s one of the better ones I feel. 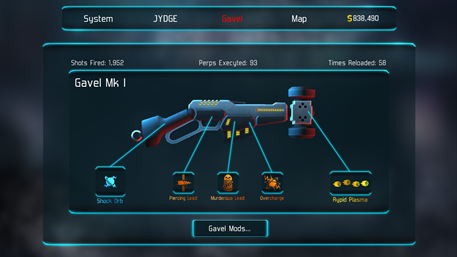 I've played the first few missions and I like it. On my iPhone 7 I have no trouble with the controls. The missions so far are easy and the visuals are excellent, if virtually identical to any other top-down shooter. I see shades of Robocop, and Judge Dread, and it states openly that it's based on Neon Chrome.

On the other hand, so far anyway, it makes almost no effort to stand apart from other similar games aside from the upgrade system, which is simple and gives you a nice bit of customization opportunity. I'll play it again.

I really liked JYDGE on my iPad. I tried it first on my iPhone 6s but the game is hard to play on a smaller screen. The graphics are fancy with a cool bloom effect and its gameplay is great. There are lots of different ways to tackle levels and the huge amount of customisation options keep the game fresh.

Its only real downside are the boring bad guys. Not only design-wise, but the AI is pretty one-dimensional as well. They just open fire whatever the situation is and they don't take cover, flank, retreat, or anything like that. Special mention for the music - it is absolutely amazing and does a great job of making you feel like you are in an old-school cop movie. I would recommend this for sure!

After already playing this quite a bit on the Switch I was keen to try it out on mobile and see how it compared. The game itself and its content seems to be identical, and it looks and runs great on my Air 2. The controls are what I expected from a 'twin stick shooter' that has no sticks - it works but touchscreen is not the best control method, though you get used to it and the experience is worth the effort in my opinion.

I like the upgrade system. There are plenty of mods and upgrades to experiment with. Any Judge Dredd fans should find a lot to like about this game and it also reminded me a little of Neon Chrome. There are a lot of twin stick, top down shooters out there but I think this one definitely deserves to be considered if you are looking for something like this to play.

I'm not big on twin-stick shooters and wasn't really impressed with Neon Chrome, that said I'm actually enjoying this a lot.

The customization adds a lot of fun in creating you own personal wrecking machine and the weapons are cool to use. The controls aren't perfect but it's on a touchscreen so take it for what it is.

I enjoyed the missions and even the music, but I will agree that it's best suited for an iPad or at least an iPhone plus. 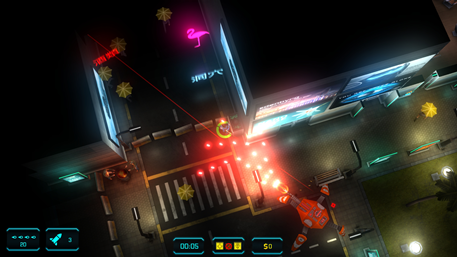 As with the other twin sticks shooters of 10tons it takes some time to get used to the controls, but after 15 minutes on my iPhone 7 I think I'm getting the hang of it.

What really shines on this title is that even though the levels are not so different, you can have different approaches: being sneaky and just make some shots, or literally shoot everywhere since the destructible walls add an interesting layer of possibilities. Add this to the upgrade system and you have a flexible game.

I really liked the thematic, the feel, the graphics and the upgrade system. I also had a very, very cool moment in the game where I was in a room with an enemy, had a shotgun, shot it from distance, and the blast of the shotgun made the enemy to fall to the abyss since there was no wall.

I'm quite surprised that this game doesn't drain much battery because looks and runs very smooth. A map of the current level would be a nice addition, but overall is one of the best twin stick shooters on the App Store.

I've not played many games like this so have no reference to compare it against. The controls took a little getting used to, but after about 10mins of playing they were second nature and the game was easy enough to control. I played the game on an iPad Air 2 and it looks very nice, better than I thought it would, and the sound was good.

It's not the type of game I would play for long stints, but to pick up and blow stuff up for 20 minutes here and there it's good fun. I also like that you can upgrade your JYDGE with the Cyberware system, even if it is a little simplistic.

Overall it's a good game and one I will enjoy playing.

This game took a while for me to get into because I found the controls quite difficult to master. That being said, the gameplay is easy to follow with the obligatory upgrades as you progress. As you go through the levels you save hostages while dodging, killing, and destroying a variety of enemies and machines. While the game is enjoyable there is a distinct feeling of deja-vu as you wait for something that sets it apart from other games in the same genre. Unhappily this wait is in vain.

I wasn't blown away by it, but as something to pick up when you have the odd half hour to spare, it fits the bill.

This is my first experience with this genre on iOS. Like the others, I found the controls took some getting used to, but the more I played and the more upgrades I used, the more enjoyable the game became. Worth a try if you're interested in top-down shooters!