At first glance, Halfbrick's latest is a very simple game.

Much like that one-click helicopter Flash game that commanded a few too many IT classes, Jetpack Joyride is about carefully lifting and landing block-headed protagonist Barry Steakfries to avoid obstacles and collect coins.

There are certainly some fresh ideas on the table: laser beams to dodge, heat-seaking missiles to bluff, and moving tokens to hunt. Oh, and the odd special vehicle too, including gravity-defying exoskeletons, space-distorting pods, motorbikes, and massive mechs.

But for the most part Halfbrick wants to keep things simple. And yet Jetpack Joyride is so darn compulsive - even more so than genre benchmark and just-one-more-go champion Canabalt.

That's no coincidence. It's the Australian studio's masterful grip on social competition, teasing unlocks, and extracurricular activities that will keep you coming back for more during ad breaks, microwave countdowns, awkward lift rides, and lengthy bus journeys.

For example, there's the in-game store, which is filled with pointless aesthetic tweaks for you to buy with your pillaged coins. Curiously, you seem to perpetually have just too few coins for the next big prize. One more go should fill up your coffers, though.

There are also the Game Center achievements to gun for, some friendly competition with pals and the public on Apple's leaderboards, and an endless stack of ranks to rise through.

There are also miniature missions. You have three of these on the go at any one time and they give you something a little more specific to aim for than simply 'survive for a long time'.

It might be high-fiving 15 scientists, collecting a certain number of coins on one go, purposely dying at a specific distance, or simply playing the game a whole bunch. Whatever the case, they ensure that every go of Joyride is meaningful.

Another deviously smart addition is the slot machine. If you manage to snag a token or two during play you can try your hand at a jackpot gamble. This might net you some bonus coins, perhaps a second chance or, most devilish of all, something like 'double coins on your next go'.

How can you say no to that?

No amount of leaderboards and beckoning bonuses can fix a bad game, of course, but Jetpack Joyride is always a treat to play. The one-touch gameplay is responsive, your floaty jetpack-toting character is surprisingly agile, and even at its fastest the game's various obstacles are never unfair or impossible.

It has brilliant presentation too, with a quirky pixel-art style and an oh-so catchy backing track that - somehow, despite being played on a loop for the hours you'll pile into this game - never grates. A miracle, by all accounts. 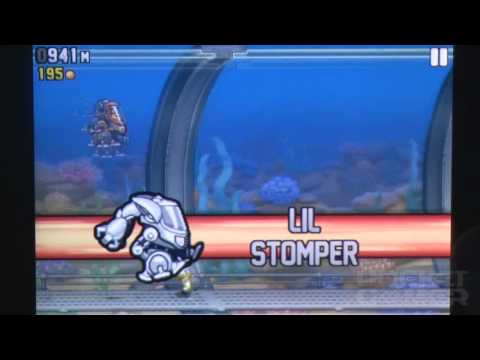 Jetpack Joyride is simplistic fun, but Halfbrick's suite of bonuses, unlockables, leaderboards, and achievements makes it near irresistible
Next Up :
Netflix Oxenfree review - "Reading the signals of a thriller story"