Jetpack Joyride remains one of the most popular mobile games around, though it's admittedly not one we cover all that often. This had to change when I became aware of its latest event – a major crossover with SNK's Metal Slug series.

For three weeks only, you'll be able to collect some of Metal Slug's best-known characters and vehicles, allowing you to wreak absolute havoc in style. You can also expect to unlock plenty of costumes, jetpacks, and more as rewards for in-game accomplishments. 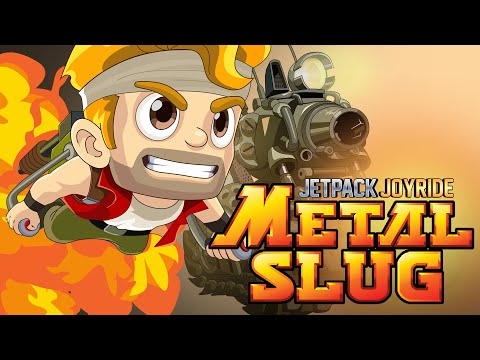 Some of the characters on offer include Marco Rossi, Eri Kasamoto, Tarma Roving, and Fio Germi. Then there are the vehicles, which include the Slug Tank, Slug Gunner, Level Armor, Slug Flyer, Slugnoid, Slug Mariner, and Motorcycle Slug.

"We are thrilled to be collaborating with one of mobile gaming's most beloved developers," said Koichi Toyama, SNK Corporation President. "We believe the high-octane world of METAL SLUG compliments Jetpack Joyride's endless chaos well, and we can't wait for fans of both franchises to enjoy the mayhem."

If you're one of the five people in existence who haven't yet given Jetpack Joyride a go, you'll find it up for download now as a free-to-play game from both the App Store and Google Play.

Are you a huge fan of mobile action games? Well, here are 25 of the very best for iPhone & iPad
Next Up :
Letter Rooms adds an advent calendar to the anagram game, with a new puzzle to be released every day this December