I don't see nothing wrong with a little bump and grind (Updated: now on Android, too)

The original Jet Set Radio acquired a small but dedicated fanbase when it launched on Sega's Dreamcast console back in 2000. Since then, there's been a semi-sequel and a couple of modern console conversions.

Now, Jet Set Radio has pulled up at Apple's App Store, ready to draw on the walls and grind along the railings.

Against the backdrop of a futuristic Tokyo, you play as a member of a skater gang who must fight to wrestle back control of the streets from an authoritarian government.

This is done in a pretty passive fashion - through skating well, pulling off stunts, and marking turf with your graffiti tags.

On the subject of artwork, Jet Set Radio's visuals have been spruced up for this iPhone and iPad edition on account of the game becoming part of the "Sega Heritage Collection".

This, apparently, means that extra attention has been paid to doing it justice on the new format. So, yeah, the graphics have been optimised for Retina displays. 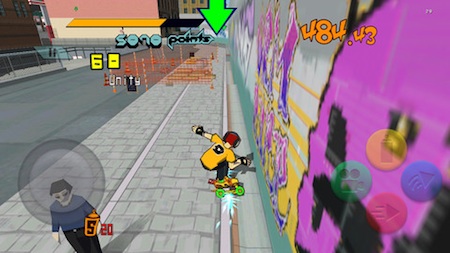 Sega has also outfitted its iOS skater with some new features specifically geared for mobile devices.

You can now apply graffiti by swiping the screen, for example, and you can also use your iOS device's camera to take pictures and spray them in the game.

Whether the game's virtual controls can do justice to Sega's free skating masterpiece is something we have yet to establish.

Jet Set Radio is out now on the New Zealand App Store, which means we'll be getting it here in the UK at midnight tonight. It'll cost £2.99 / $4.99.
Next Up :
SAMURAI X - X-Sword Style, a brand new 2D action platformer, launches today

Jet Set Radio coming to Vita, iOS, and Android by end of November