Iron Marines: Invasion, the sequel to the classic real-time strategy game, reveals itself with a teaser trailer

Developer Ironhide Game Studio, makers of the classic tower defense franchise Kingdom Rush, has announced its next project; a real-time strategy game called Iron Marines: Invasion. The sequel to the classic Iron Marines will see you taking part in intense RTS gameplay, ordering a squad of space marines around alien terrain to do battle.

To get a little more specific, Iron Marines: Invasion will have you commanding a small army of space marines as you defend and attack various alien planets, conquering the unearthly inhabitants in battle to save the galaxy from their menacing abilities. As you navigate unpredictable terrain, beat thrilling challenges that will keep you on your toes, and enhance your team’s abilities, you’ll slowly begin to overcome the alien threat until you’ve eradicated them completely. 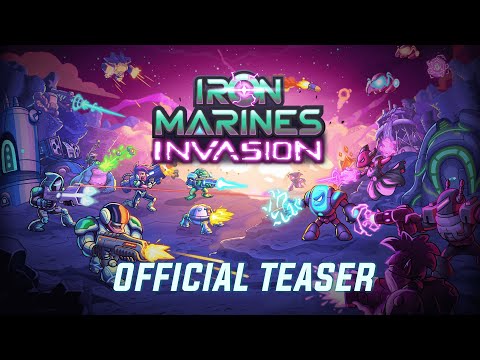 This comes along with a nice pixel art style that doesn’t take itself too seriously. Don’t anticipate a Dawn of War or a Starcraft here, Iron Marines is meant to be a bit more of a humour-filled casual romp than a hardcore RTS like those titles. That, however, doesn’t mean that it’ll be a walk in the park. Iron Marines want to stress that it is a decently challenging experience and that you won’t simply be treading over the aliens like they’re nothing but cannon fodder. To succeed, you’ll need to use your reflexes and your wits to order your soldiers and become victorious.

Of course, if you’re familiar with Ironhide’s works, you’ll also know that this is a sequel to the original Iron Marines game. Anyone who has played that will be right at home here, as this is really just a continuation of that game that looks to expand and enhance the original experience.

If all of that sounds perfectly up your alley, or if you’re a fan of the original Iron Marines, you can pre-register for Iron Marines: Invasion on the App Store and Google Play. Currently, we don’t have a solid release date, so stay tuned to the Ironhide Game Studio website for any updates or news.

Looking for more strategy battlers to test your commanding skills? Check out our Top 25 best strategy games for iOS!
Next Up :
TerraGenesis: Space Settlers is participating in the Green Game Jam initiative with a competition between players to plant the most trees