All about gamebooks (and interactive erotica) in this exclusive interview

While using inklewriter to put together B-SIDES - an experiment in games writing from Pocket Gamer - I got in touch with Jon Ingold at inkle to ask him more about why the team made its game book creation software, why making development something everyone can do is important, and whether there were any hints at future developments from the studio behind 80 Days and the Sorcery! series. 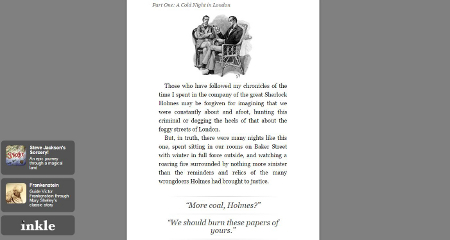 Pocket Gamer: Why did you decide to create inklewriter?

Jon Ingold: When we began creating interactive stories, we had a sense that it was a strange idea to try and create a kind of storytelling that people couldn't "do". If you want to write a story, you grab a pen; but if you want to write a choice-based story, you have to learn a programming language - and by the time you've done that, you've probably forgotten what you wanted to write about (assuming you can get your head around it anyway).

So we thought it would be interesting to try and develop something that would let people just get on and write. Maybe we'd find some amazing new writers to work with - maybe we'd simply let people discover that interactive fiction could be fun and interesting.

We use it ourselves for sketching out ideas, and for getting writing samples from potential hires. Meg wrote the first sample script for 80 Days in inklewriter, and as soon as we read it we signed her up.

What we didn't expect was that inklewriter would make its biggest impact in schools; but we've won a few awards from various educational associations, and inklewriter is quite regularly used for computer / creative cross-over work with children aged 9-12.

Of course it is.

We've had lots of games now made by people who are good at programming, people who liked D&D, by engineers and mathematicians. But if games - or interactive art in general - is interesting, then there are a lot more things we can do if other people get involved. You know what I want? I want to play games made by people over 75.

And, if game development gets more democratic, that's just another way of saying it's getting easier to do. That's everyone taking a step up - if we can spend less time building the same tools over and over again, whether that's interactive story engines or 3D renderers, then we can get on with the good stuff that anyone playing the game actually cares about.

The only people against democratising games are those who are worried that their games aren't very good, and they'll lose their audience if more people get involved. Which doesn't seem fair on the audience, does it? 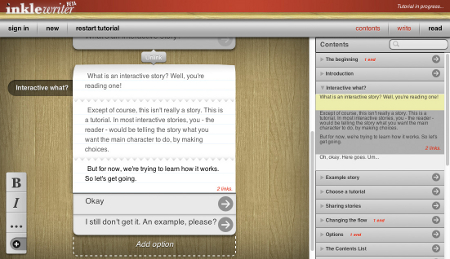 What's been the standard of work produced so far? Any stand out examples?

We don't read many of the stories! A few writers a year contact us to show us what they've produced, so they tend to be pretty good (and they usually come with a CV attached).

We also see those stories which are sent in to to be converted into CYOA and eBook versions. We've seen some good young adult stories come in that way (along with an eye-popping amount of interactive erotica).

But when we come across good examples - by hook or by crook! - we tend to link to them from the site on our Library page. There's not many there, but we like what we have.

Otherwise, it's been interesting to see inklewriter used a few times for knocked out satire pieces - spoofing everything from British ministers to Kotaku commenters. One was retweeted by Graham Linehan, the IT Crowd writer. If that's not big-time satire I don't know what is.

But that's exactly what we wanted from inklewriter - letting people just fire off an idea when they had it, get it down, get it out, and say what they want to say.

Any plans for future updates to inklewriter?

Development on inklewriter has frozen slightly. We're not intending to add any extra functionality - it more or less does what we want it to, and the additional features that are often requested (things like free keyboard input, or "inventory windows" - we get that a lot) are really things which people should move over to Twine or a more sophisticated platform for. Our vision was completely pick-up-and-write interactive storytelling, but if people want to start coding full games, it's probably not the right tool.

We're pretty happy with the export options right now - we recently added the ability to turn a story into a paper "numbered paragraphs" format, which is particularly fun as the final story copes automatically with markers, flags, and counters in the story logic, so you can make a fully adaptive story in paper form. It does that by duplicating passages, we've had some stories run to over 10,000 paragraphs which, in fairness, probably isn't a good idea to print. 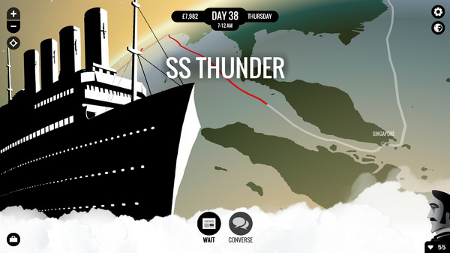 And what's next from inkle?

The Steam release of 80 Days has been keeping us pretty busy for the last couple of months, but that's finally out of the door. That's been quite involved - learning new technology (Unity), as well as writing a whole lot more content - and making sure it didn't break the balance of the game!

Otherwise, we have a few interesting ideas and prototypes running, and of course, Sorcery! 4 is well underway. We're really looking forward to an epic finale for the series, it's not often you get to wrap up such a big storyline, or indeed, so many storylines...

My thanks to Jon for taking the time to speak with us. You can get the newly released Steam version of 80 Days here, and read our review of the mobile version here. You can play Pocket Gamer's own B-SIDES here, and read about its development here.
Next Up :
Noah's Heart first impressions preview - "Puts the 'massive' in 'MMORPG'"