Jonatan Söderström, the twisted indie genius behind the ultra-violent Hotline Miami, has told Pocket Gamer that his team has "been talking to Sony" about bringing the game to PlayStation devices - including Vita.

If you haven't played it yet, Miami is a top-down, neon-dipped action romp, where you systemically take out bad guys in the most bloody, destructive way possible.

This sadistic game has been racking up high scores on PC: it's currently sitting pretty with an 87 on Metacritic.

Don't expect to see the game on Vita any time soon, though. "We would need someone to port it for us," Söderström says. 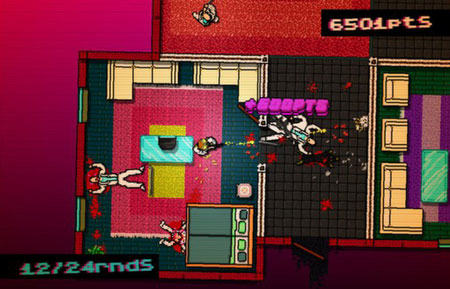 The game's creator - who famously helped out people who pirated his game - is also considering porting Hotline Miami to touchscreen devices like iPad and Android.

"Would be interesting to see if it was possible to get it to play well on a touchscreen device," Söderström says. "Sounds like a challenge."

Hotline Miami, MotoGP 13, and Velocity Ultra are your free PS Plus Vita games for April