iOS + Android + Steam
| Heroes of Loot 2
Updated on June 7th at 12:14: Like a surprise rare loot drop, Heroes of Loot 2 has released on the App Store earlier than expected.

It's also available on Google's Play Store for the same price right now. 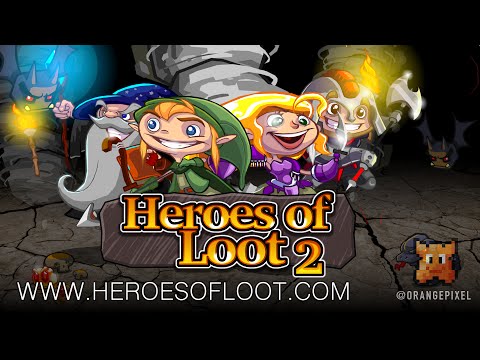 Subscribe to Pocket Gamer on
OrangePixel's dual stick shooter masquerading as a roguelike dungeon crawler impressed us greatly back in 2013, and now the bigger, faster, and more rogue-ish Heroes of Loot 2 is blasting its way onto iOS, Android, and Steam later this week.

The magical dual stick action remains, but this time, you control two characters at once, choosing between varied classes and then switching between the two as you explore dangerous dungeons.

The Elf fires enemy piercing arrows, the Warrior wields a crushing hammer, and so on, while upgrades and power-ups found throughout the randomly-generated dungeons enhance and buff your attacks. If you looking for traps, puzzles, and bosses, you can complete quests encountered in dungeons, earning gold, gems, and powerful loot. An growing pool of unlocks such as spells keep the hectic action fresh as you survive the game's roguelite dangers.

Heroes of Loot 2 will be coming to iOS and Android, and leaving Steam Early Access, on June 9th.