With veterans from Age of Empires creator Ensemble Studios, Robot Entertainment is hoping to reinvent a staple on the mobile: turn-based combat.

The chess-like Hero Academy won't wow you with its originality, but the smooth interface and nice graphics make it fun to play all the same.

As we saw in our recent preview, Hero Academy pits you and your warrior crew against another online player. Your job is to knock down your enemy's energy bar or eliminate the enemy's whole squadron before he or she does it to you.

There are two levels of combat. First, you have melee. There are five different types of characters, from tough warriors to magic casters, all with different strengths. Second, you have a crystal that gives you power.

The game becomes a balance of defending your crystal (or, in some levels, crystals) and team while using your party to attack the enemy's crystal and squad.

Where you are on the 9x6 board makes a difference as well. Shield tiles raise your defences, attack squares increase your power, and so on.

Hero Academy is a free-to-play game. There are five-second ads after every turn, but they're fairly unintrusive. Pay a pound or a dollar and the game will unlock more team options – and turn off the ads.

You can find opponents via Twitter, Facebook, or email, or get paired with a random player online. No matter the choice, you'll be matched within a few seconds. We had hardly any issues connecting to the main server. The game has a nice, natural rhythm.

Hero Academy's gameplay probably won't satisfy hardcore turn-based gamers. There's no AI to speak of, so you can't sharpen your skills against the computer before you hop online. Furthermore, with only ten characters and a handful of power-ups, there's only so much strategy you can use.

That said, the casual, easy-going nature of Hero Academy is also its strength. As a generous freemium title, it's worth a look. 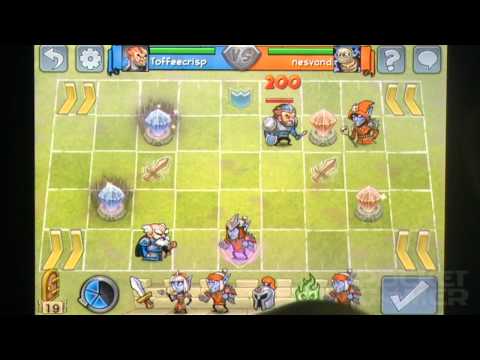 Hero Academy is light on strategy, but provides smooth pick-up-and-play fun
Next Up :
Backbone One review – “Turn your iPhone into a games console”

Hero Academy to get cross-platform play between iOS and PC