Heck Deck is an ambitious hybrid of a card game and bullet hell shooter, available now for pre-registrations on Android and iOS

Do you like playing cards? Do you like dodging the infinite barrage of projectiles in bullet hell games? What if I told you that you could enjoy both of these seemingly opposite sorts of games together? For that, here is a little story about the game developer torcado. It all began at Ludum Dare, where this solo developer created a game for LD41 in April 2018. The theme was “Combine 2 Incompatible Genres” and these developers made the game in just 48 hours! The best part is that they ended up being placed 1st in Innovation, 3rd in Fun and Theme, and 5th overall. So, Heck Deck was born.

Simply put, Heck Deck is a bullet hell card game where the projectiles have been replaced by cards and the progression of time is solely dependent on your movement. After receiving accolades at Ludum Dare, the developer at Torcado began to refine the game to turn it into a full-fledged title to put on virtual shelves. Cut to today, about three years later, Heck Deck is nearly complete and is being published by the French publisher PID Games. The game is also launching pre-orders today as well. 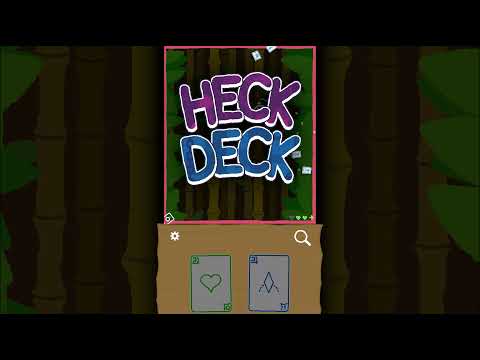 Heck Deck features five unique levels, made completely in a hand-drawn art style. Each stage has its own awesome music, created by keestak. But don’t be fooled by the game’s cute animation or nice music. All that is just a mask for how difficult it is going to be. Be prepared for a tough challenge as through the levels you will be going up against over 30 enemies and bosses. Heck Deck is a perfect combination of strategy and action, with dozens of attacks and spells at your disposal and numerous cards available in the shop, you have to pick your moves wisely.

Heck Deck is currently slated for release in January 2022. You can pre-register for it right now on the App Store and Google Play. Let’s see if this unique culmination of genres turns out to be a fun one.

Also check out the best strategy games to play on mobile!
Next Up :
Ragnarok Origin, Gravity's fantasy MMORPG, has released on Android and iOS worldwide.

Heck Deck tests your agility in a charming bullet hell card game, out on January 11th