In London's St James' Park, it's starting to drizzle a bit. There's a man with squirrels running all over him, who I'm told is a local "squirrel whisperer". I did not bring a coat. It's a bit grim.

Through my phone screen, however, I'm walking around Ollivanders wand shop in Diagon Alley. I've just defeated a bunch of evil wizards and goblins in a fortress, and I've saved Harry Potter from getting the life sucked out of him by a Death Eater.

This is the wonderful world of Harry Potter: Wizards Unite, the latest real-world game from Pokemon GO creators Niantic. And from what little I got to play at its first press showing last week, it could well end up being your new obsession. 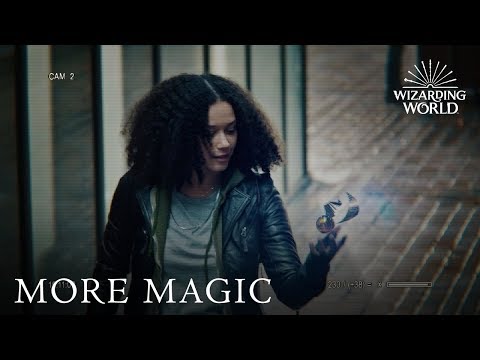 Let's get something out of the way right off the bat - yes, this game borrows heavily from Pokemon GO. There's simply no way around that fact.

It's built off the same "real-world platform" that Niantic has been using in Pokemon GO and Ingress, so you're going to have a fairly similar experience here as you would in other Niantic games.

Which is no bad thing. Niantic's platform has improved considerably since previous game launches, and Harry Potter: Wizards Unite is taking full advantage of the improvements.

Straight out the gate, you'll notice that encounters are affected by the weather, time of day, phases of the moon, and all sorts of other factors tracked by the game's platform.

It's also less likely to fall over when it launches - Niantic says it's learned a lot from the experience of launching Pokemon GO, and hopefully won't be making the same mistakes twice.

On a gameplay front, the experience will be instantly familiar. As you wander the real world, encounters and locations pop up on your screen, ready to be played with.

The key encounters are called Foundables, little fragments or memories of the wizarding world that have somehow found their way into the Muggle world and need to be sent back before the existence of magic is revealed to everyone.

To do this, you need to search the world for Confoundables, dark energy that's keeping the Foundables in the real world, and swiftly defeat them with a flick of your wand.

Rather than throwing out Pokeballs and hoping for the best, you instead need to trace a pattern on your screen to cast a spell. Draw accurately and quickly and you'll get a higher grade for your catch, leading to better rewards.

Once a Foundable is freed and returned, you get a little sticker to add to your wealth of sticker books to prove you caught it. It's a bit like the Pokedex, but, well, not.

You'll also need to contend with the odd battle in the world too, and not just at the game's Gym equivalents. Random foes will show up on the map as you explore, and you need to defeat them in combat to send them back to where they belong.

Battles work similarly to Foundable encounters - it's largely gesture-based drawing - but you'll also need to lock-on to your target by hovering your wand over an icon for a bit before you can launch an attack.

Inns and Greenhouses are your Pokestops, offering up spell energy and potion ingredients respectively. Fortresses are your new Gyms, but they work a little differently from before. Stickers are your Pokemon, and so on.

The Fortresses are particularly interesting. From launch day, you'll be able to enter these areas with up to four other people, all of you battling various enemies within the fortress to clear it out and score huge rewards.

It's the same one-on-one battles you'll encounter on the street, but you'll have to work with your team to make sure everyone's taking on the right enemies to fit their levels and types to gain an advantage.

Oh, yeah, there's also a really deep RPG system to contend with. You can choose one of three classes - Auror, Magizoologist, or Professor - each with their own skill trees that can be upgraded to unlock new abilities and boost your stats.

You're free to change class at any time, though you can't re-spec your skill trees. Instead, you can just switch around and keep them all levelled up so you have an advantage in battles no matter what you're faced with.

You earn skill points by entering Portkeys to areas in the wizarding world, like my aforementioned trip to Ollivanders, and completing certain objectives within the worlds.

Portkeys act a little like Pokemon Eggs in that you'll need to walk a certain distance before they're useable, and gosh, this is all a bit confusing isn't it?

Indeed, there's a ton of stuff thrown at you at once right from the word go. The improvements that Pokemon GO steadily added over the years have been thrown into the mix right away, which could prove a tad overwhelming to new players.

But, as I've already said, it just works. Walking around St James' Park fighting off witches and wizards and saving familiar faces of the Harry Potter universe feels pretty darn cool, and while it's all a bit difficult to explain in words, in practice it makes perfect sense.

There's even more to come, too. Niantic wasn't ready to spill all its beans at the preview event, so even we don't know what's coming up, but we're sure it's going to be good. And probably borrowed in some way from Pokemon GO.

Harry Potter: Wizards Unite is set to launch some time this year - a more exact date is yet to materialise. But if you were concerned about how the game was going to shake out, don't be. It's set to be pretty magical.