It originally released for mobile back in 2013

Following the Switch release of Space Grunts last month, indie developer Orangepixel is continuing their current quest of releasing one of their mobile back catalogue onto the Nintendo console each month. For November it will be Gunslugs.

If you're unfamiliar with Gunslugs, it's an unapologetically action-packed game that draws inspiration from similar arcade titles of years gone by. It provides an excellent time-filler as you mindlessly blast your way through a tonne of enemies to save the world from the Black-Duck Army. 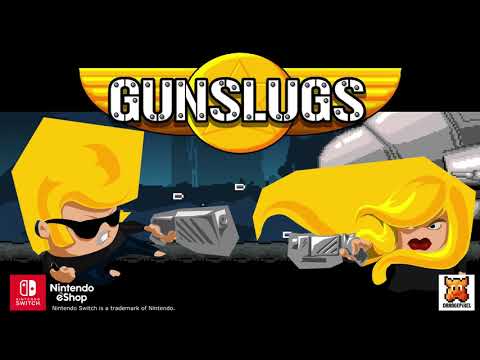 There's a variety of Gunslug Heroes to unlock throughout your journey as you shoot your way towards the final boss, who'll you'll find behind the gates of Hell. It takes place through a variety of locales including plane yards, jungles, Arctica and Egypt. That's not all either, some slightly more bizarre levels see you battling enemies inside a broken Gameboy.

There's a little variety in the levels themselves too. Instead of simply moving from left to right until the end credits roll, some stages might see you fighting on top of a train or within a Donkey Kong-inspired level where you'll need to collect coins to score extra points.

There isn't a set order for these levels either since the game is randomly generated. One run may start with you rampaging through stages in a tank or a jet-pack whilst another might begin on foot. You can check out some gameplay from Gunslugs in the embedded trailer above.

Gunslugs will be available for the Nintendo Switch from tomorrow for $7.99. However, if you'd prefer to play it on its original home, you can grab it over on the App Store and Google Play for $0.99.

Looking for more action-packed games to play on your phone? Here are 25 of the best available for Android
Next Up :
Mech Arena’s Mechs are Here event that aims to donate to the AbleGamers foundation is now live

Grab a shotgun: Silver Award-winning Gunslugs is out on Vita right now

All other weapons rendered superfluous by Gunslugs's new chicken gun

Gunslugs running on the Ouya in 2-player co-op mode