Let's get the obvious out of the way first. The controls in this tenth anniversary port of Grand Theft Auto: Vice City are not ideal.

To be fair, Vice City was always a complicated beast. The sun-soaked crime sim used every last one of the PS2's billion-odd buttons to let you drive cars, gun down goons, get in brawls, fly choppers, race motorbikes, and drive boats.

So trying to translate all that to virtual buttons and joysticks is never going to be perfect. Vice City is definitely playable on mobile (we played on an iPad mini), but there's going to be compromise. You'll fight with the buttons, and blame your death on the controls.

There are a lot of options, though. You can move all the buttons about the screen, and choose to steer with a virtual joypad or tilt. But other areas are less flexible - first-person aiming sucks, and fighting indoors is about as much fun as being kicked in the plums.

The actual game, however, is more faithful to the original. You play as Tommy Vercetti, a mouthy mafioso dirtbag who's banished to the neon-soaked, hedonistic, Miami-like wasteland that is Vice City.

Missions might involve killing guys, chasing thugs, watching over drug deals, evading the police, and driving getaway cars. There's frankly loads to do, but some more annoying errands (like one featuring a certain remote control helicopter) can sour things.

This remake lets you instantly retry failed missions, though. That resolves some of the pain.

Then again, GTA has never been about the missions.

It's about messing around in its sandbox world, jumping over ramps, picking random fights with cops, and flying choppers into pedestrians. Having that playful world on your phone - ready for a quick bash - is worth the entry price alone.

For a decade-old game, Vice City's story and presentation still impresses. After making do with Gameloft games - and their cringe-worthy B-movie dialogue - getting some quality narrative on mobile is like a breath of fresh air.

It has a killer voice cast (including Ray Liotta, Dennis Hopper, and our national treasure, Danny Dyer), and a hilarious script that references (or parodies) '80s crime flicks like Carlito's Way, Scarface, and TV show Miami Vice.

It's also got an insanely good soundtrack, packed with music from the same decade. The graphics aren't half bad, either - a little dated, but they've been given a fresh lick of paint for this mobile edition. The people have fingers now!

In the end, I reckon this mobile edition of Vice City is only going to be appreciated by longing nostalgics who fondly remember bad Hawaiian shirts, the Lance Vance dance, and getting in golf caddy chases.

It's not that Vice City has aged poorly, by any means. But if you're having to wrestle with antiquated gameplay, choppy PS2-era graphics, and bad controls, it might not be so appreciated by fresh eyes. 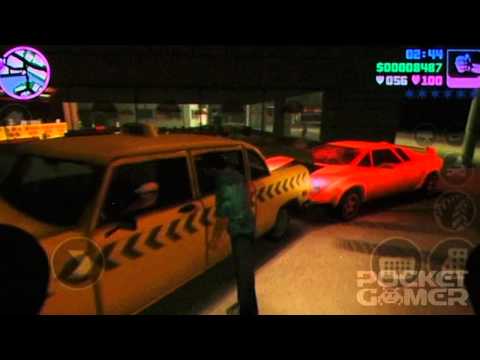 Rockstar has done a commendable job of bringing a stone-cold classic to mobile. Controls let the package down, but it's worth the cost for the memories
Next Up :
Evony: The King's Return review