There's one very specific moment in Grand Theft Auto 3 that has always stuck with me. You're working for Toni Cipriani (some two-bit Mafioso scumbag) and he wants you to crush a car with a dead body in the back.

But then a rival gangster rear-ends your saloon, sending the boot spiralling down the highway. And in the back of the car is the corpse - the cold, stiff, and very bloody body. It's a dark image, especially when it's set against chattering radio hosts and satirical billboards.

Dead Skunk in the Trunk

But that's aways been the strength of the Grand Theft Auto games: deftly mixing the violent with the funny, and fitting them snugly together like a baseball bat and a hooker's brain case. Rockstar's seminal crime epic is two parts laugh-out-load hilarious, three parts manically evil.

It does prove one thing: Rockstar won't self-censor for anyone. Chinatown Wars still had a drug-dealing meta-game on the kid-friendly DS, and Grand Theft Auto 3 has kept every morsel of its psychotic, reckless chaos in the leap to the prudish App Store.

The move from a 14-button controller to a zero-button touchscreen hasn't hindered this iOS conversion too drastically. Despite the odds, mute crim Claude and his garage of speedy cars control admirably on both iPhone and iPad. Movement with the fake analogue stick works well, and steering with the fake directional buttons is effortless.

The camera does cause concern at times. For the most part you don't need to worry as it zips around for you, constantly eyeing-up your back or your boot. But the few times you need to look around - when reversing out of a tight corner, say, or when being shot in the arse - having to place your thumb in the centre surrenders practically all other control.

Like its PS2 predecessor, this mobile edition of Grand Theft Auto sticks with automated targeting instead of a proper aiming system. This works better when you've got some distance than in close-up. Irksomely, it sometimes prioritises your aim on some innocent biddy rather than the angry triad who's currently loading a shotgun. But combat was never the strong suit of Rockstar's trilogy.

Drive Misty For Me

Driving, on the other hand, is nearly perfect. Set in a world where the motorbike hasn't been invented and the helicopter has evidently been outlawed, you only have to worry about cars, and these motors control well. It lets you bomb around corners with the handbrake, and confidently weave between traffic.

Overall, the controls are a compromise - but mostly a successful one. The visuals are even less hampered by the device. The game runs as smoothly as silk on A5 devices (iPad 2 and iPhone 4S), and moves at a very steady clip on A4 (anything else).

A short draw-distance can make the city disappear into the horizon and strikingly pop-up as you speed towards it. Still, most of the textures and models have been given a tune-up from 2001.

Those are the differences, and everything else has been left in much the same state as you remember it. It's still about executing drive-bys for mob bosses, or collecting taxi fares for extra cash, or flying off one of 20 unique jumps, or just kicking back and getting in a pointless police chase.

Taking Out The Laundry

Grand Theft Auto 3 is more than just tabloid fodder, or a jumping-off point for hundreds of copycat sandbox games. It's an accomplished game in its own right, with wisecrack radio stations that will still make you laugh, a clever city layout that still feels enormous, and caricature criminals that you still enjoy working for.

Despite its advanced age, Grand Theft Auto 3 remains fresh and its huge Story mode is still lots of fun. This isn't just some retro curio trotted out to meet an anniversary date - it's a game you'll come back to again and again, either to advance the story by a few missions or just to see how long you can dodge the cops for. 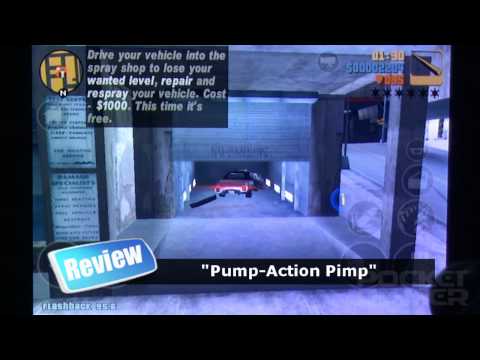 A fitting anniversary gift for a blockbuster franchise. Despite the odds, this is a largely successful port of an iconic game, and it's still massive amounts of fun to evade police, pull off jumps and complete missions
Next Up :
UFO99 review - "A fun little arcade game on the go"