How to ascend to the throne - Game of Thrones: Ascent strategy guide

If, like I am, you're a Game of Thrones fan, you'll be champing at the bit to get to the end of the plot of Disruptor Beam's Game of Thrones: Ascent.

You'll also presumably be champing at the bit to see the next episode of the TV series. But that's a different story.

With all that in mind, then, here's a handy strategy guide for Game of Thrones: Ascent to get you speeding on your way to rulership faster than a horse could carry you across the Dothraki sea.

First, though, I think it's worth reminding you quickly that the single best thing about Game of Thrones: Ascent, as we highlighted in our review, is the narrative and the writing. You really do feel at one here with Westeros.

Just as you'd expect from a game based on political treachery, there's all manner of spying, back-biting, twists, and turns in this game. So, while it's fun to try and maximise your gains, make sure you ease back a bit and appreciate the narrative pleasures on offer, too.

If you do want to play the game super-seriously, then one of the first things you should understand is the concept of reincarnation. You can play the game all the way through with your character and start again.

This is important because while most things do not persist through reincarnation cycles, there are some exceptions.

Most notably, each time you ally yourself with one of the Great Houses, you gain a building type unique to that house, which you can re-build each time you reincarnate. 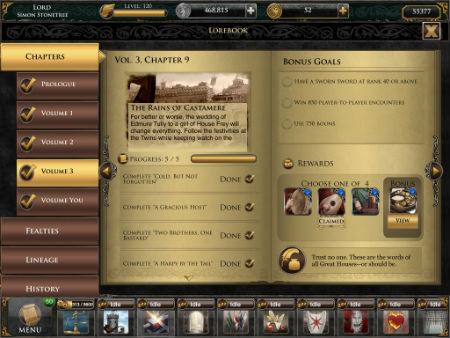 However, the other Great House bonuses do not persist. So, when you first get the chance to choose a great house, look at its talents very carefully, decide on the one you like best, and play that house last through your reincarnation cycles.

That way, you get all the buildings from the other houses, and then get to keep your chosen talents long term.

Of course, if you're only planning on one playthrough to enjoy the story, this doesn't matter - you should just pick your favourite house (which is Greyjoy, obviously) from the off.

Whichever way you choose to go, the game will leave you on your own with a choice of options after a short tutorial.

What most players will want to do, of course, is dive right in and get on with some adventures. Which is great... right up until the point where you hit your first timer and discover you either need to pay some real cash to get rid of it or go do something else.

To start with, that 'something else' will consist of making sure you're got a few essential buildings and upgrades and then setting them to work.

You'll have constructed a counting house during the tutorial, and it's a valuable source of income. However, you'll quickly realise that unless you can log on very frequently to drain its resources, you'll effectively be wasting money once the house has filled up to its limits.

So, once you've got enough silver in the bank, start buying the Counting House upgrades. Increase its storage limit until you're at a point where you can go to work (or sleep through the night) without losing much in the way of income. Then, you can start alternating with those that increase the income rate until you hit a nice balance.

Of course, the Counting House is not the only important building. And, of course, all its upgrades are also behind timers, So, yes, you'll need something else to move on to once those are set in motion.

Your next target should be the Village Center.

This helpful house makes resources for free, without catches: a rarity in a free-to-play game. You'll have to wait, of course, but since you'll need these resources alongside silver coins for most of the other upgrades you want, it's a valuable investment. 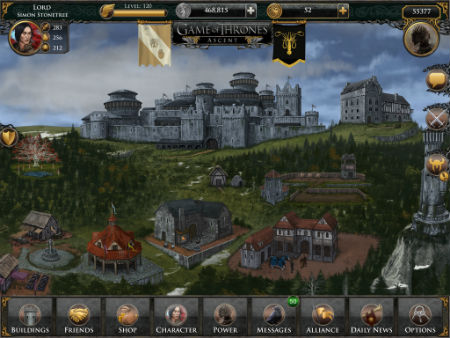 After a few levels, you'll gain the capacity to build religious buildings (i.e. the Godswood and Sept). They might not seem terribly useful, sure, but you should still invest in them. That's because these allow you to make mead and fresh-baked bread, respectively.

While it might seem appealing out of game to ensure you have the supplies to get drunk and cure the munchies afterwards, there's another reason you should be obtaining these items.

They're the only way you can reduce the timers with which you'll constantly be faced without stumping up actual cash.

And, as a bonus, they persist through reincarnations. So, if you're taking that route, these items offer a major speed boost for your second and subsequent trips through the game.

Quest for the Swords

By the time you've set all this in motion, your Sword has probably finished its first quest. You can, therefore, start taking on more in a bid to drive the plot forward and to increase your resources, silver, and experience points.

You'll probably notice that not all quests require you to send a Sword. A castle icon on the main screen where you select quests denotes one of these.

It's always worth running through these quests first for the silver and resource bonuses they provide before turning to the more time-consuming Sword quests. 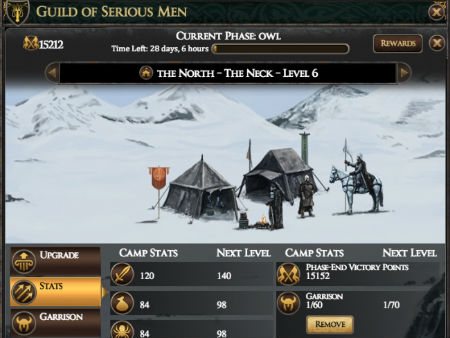 Sadly, there are a lot of Sword quests, and you'll rapidly reach the point where one Sword just isn't enough. Once you get there, you'll want to temporarily halt your focus on building upgrades and save up to hire another.

Eventually, you'll want somewhere between five and seven Swords, and - if possible - you'll want them to specialise in a range of different skills to make sure that you've got someone suitable for any given situation. When you get the chance to upgrade their stats, focus on each one's particular skill - there's little point in spreading it around.

When you're choosing a Sword for a particular quest, take note of the blue bar. This indicates your chances of success and is a reliable measure.

When you've got a stable full of Swords at your command, it's very tempting to play the mighty liege-lord and try to micro-manage their stats and equipment. But here's a slightly surprising thing: it's more important to manage your own.

Your character has stats and equipment slots just like your Swords do. And your relative abilities seep down the chain of command and provide a boost to all your Swords. So, giving that Valyrian steel blade to yourself, rather than to your favourite Sword, is totally the right thing to do.

With yourself kitted out like the Lord you are, a battery of loyal servants at your command, a prospering hold with an overflowing Counting House, a productive Village, and quietly contemplative holy places, you'll soon be speeding your way to the Iron Throne.

Next Up :
Illusion Connect Tier List - Every hero ranked

Bronze Award-winning Game of Thrones: Ascent lunges and lands its blade on Android and iPhone

Game of Thrones: Ascent has finally leapt from Facebook over to iPad