'As long as the community appreciates what we create within the Galaxy on Fire universe, we will provide them with lots of new stuff'

There are two audiences for iPhone and other smartphone games these days. There are the newcomers, drawn to the platform by hits like Doodle Jump and Angry Birds, and there are those who've been playing mobile games for years.

The name Galaxy on Fire means more to long-time mobile gamers than to newcomers, because for years it's been the poster child for the surprising gaming potential of the call-making machine in your pocket.

But it's rapidly gaining a name for itself among the recent mobile gaming converts.

Last year's Galaxy on Fire 2 - a complete remake (and not a port) of the Java space combat and trading sim - was a critical and commercial hit, and it's the closest any developer has come to bringing a game on the scale of Frontier or Freelancer to iPhone and Android.

With Valkyrie, a huge paid update containing new missions, ships, weapons, and characters, Fishlabs is hoping to further establish Galaxy on Fire 2 as the most fully featured and professionally produced space-trader on iPhone and Android.

The update is due to go live on April 28th, so we caught up with Fishlabs's Michael Schade to discuss pricing, the studio's ambitions for Valkyie and the Galaxy on Fire franchise, and why Keith T. Maxwell needed a strong female antagonist. 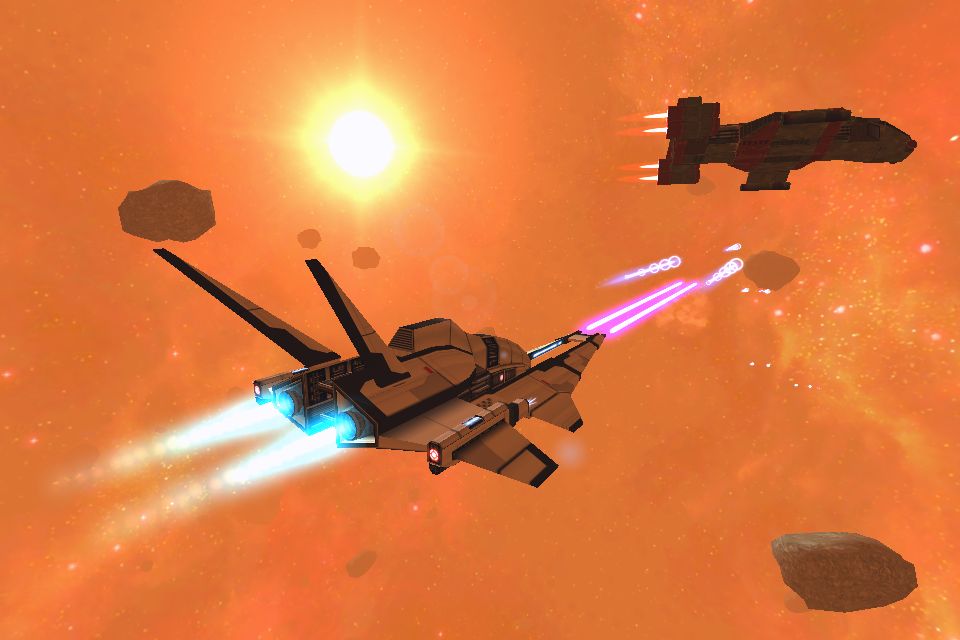 Are you pleased with the reaction to Galaxy on Fire 2?

We knew we had a pretty good title coming for hardcore gamers and sci-fi nerds on iOS. We were expecting our loyal and also new fans to go crazy about the fact that we were bringing a PC-quality sci-fi simulation game to the mobile platform

But we also anticipated a lot of hypercritical people comparing GoF2 with a full priced AAA title and ripping it apart - as well as lots of guys complaining about its premium price tag.

It turned out only a handful of players were complaining and even if they had something to complain about they still gave us mostly five, sometimes “just” four stars, pointing out how exceptional the game is.

Also, it was striking how mature the reviews were. Our fanbase understands that quality comes at a price and shares the same appreciation of sci-fi video gaming history, all the way from Elite, Wing Commander, Freelancer, Mass Effect, and EVE.

Did you always plan to create DLC for it?

Oh, yes! Even back in the days of the J2ME version, we had it in mind to expand the universe of Galaxy on Fire 2 if it became a hit.

We had even developed a proprietary server technology named OCEAN back in early 2009 (for online authentication and asset management) to be able to distribute the game for free from our website and to monetise even illegal downloads from all over the web.

Actually, we were doing the freemium business model with DLC even before it became so popular on the App Store after Apple introduced in-app purchases.

Well, on feature phones that didn’t work too well because of the massive data charges and the absence of a solid store with proper billing and such.

However, we were convinced, in spite of the massive success of some freemium games on the App Store, that it is safer to create buzz over many months for an outstanding title like Galaxy on Fire 2 and aim for a core audience rather than try to compete against all the ultra-casual freemium titles, with a much broader target group, sitting on the top of the charts. 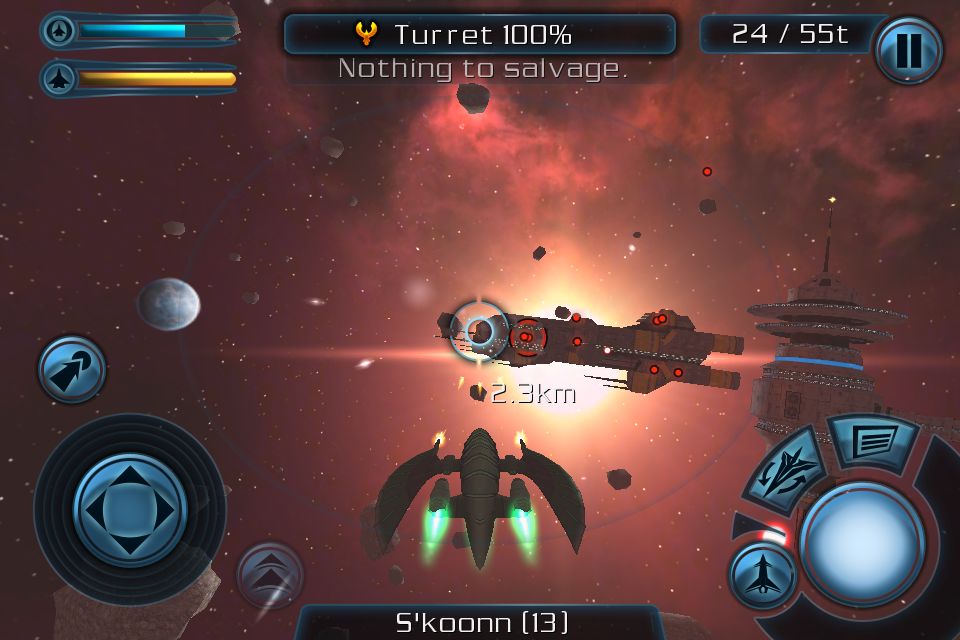 What new features and gameplay elements will the Valkyrie update bring in terms of weapons, ships, characters, missions, and other features?

Oh, there is plenty: First we brought some ships from the first instalment of the game back to Galaxy on Fire 2 as many fans have asked for this. We also introduced completely new ships, like some new fighters from the Vossk Empire - also a big request from the fanbase.

My personal favorites are the ships of Deep Science. These are really slick and just beautiful to watch while very powerful at the same time.

New gameplay comes in the form of some very cool new weapons and gadgets like the Liberator, a remotely controlled missile with a tremendous range or mines to get rid of pesky enemies who are on your tail.

Probably the coolest gadget is the emergency shield that comes up when the hull of your spaceship is about to collapse.

It makes you invulnerable for ten seconds, time enough to regroup in a nearby system, and it looks so cool.

Also, a great gameplay improvement is that you can have your own station now to park several ships and store plenty of goods, which will please all the collector savvy players in Galaxy on Fire 2.

The new storyline of Valkyrie introduces some new characters but also features known protagonists. It starts off right after you finished the original main plot and adds about two thirds to the initial storyline. It is still up to you if you follow the plot closely or take your time to do side missions and explore the new solar systems in Valkyrie. 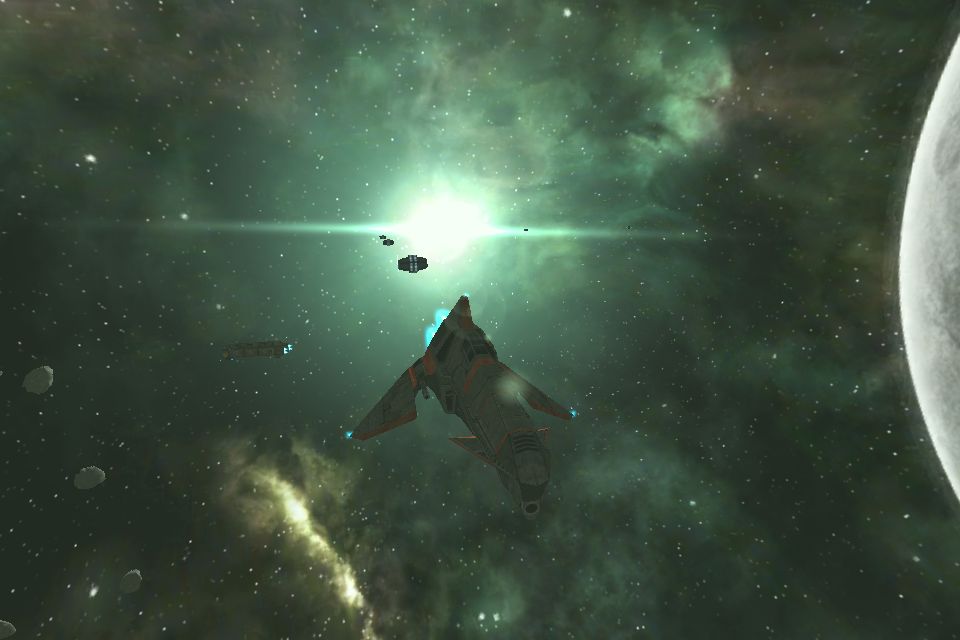 Why did you decide to introduce a female lead character?

As our hero Keith T. Maxwell is slightly haughty and always good for cocky comments or a little challenge outside the station, we thought we'd bring in a new obscure female character that is at least as self-confident as Keith is.

It is an unfamiliar situation for Keith, having to deal with such a strong character that obviously is above him in the food chain, and he is torn between his greed for money and doing the right thing.

This is, of course, not a completely new scenario but with a bellicose female character as the antagonist for Keith it has a nice twist.

Will the Valkyrie update feel very different from the original game?

In the original version of Galaxy on Fire 2 it was crystal clear who the baddies and the good guys are.

When the Voids came through the wormwole to ambush the Terran convoy, you know immediately who are you going to fight against for the next couple of hours.

Not so in Valkyrie. The plot is much more vague and Keith wonders what is going on for quite some time.

Also, the openness and vastness of Galaxy on Fire 2 has been pushed even further in Valkyrie. There are new solar systems with a completely new look and feel. Also, the pirates, controlling the black market system Loma, become a bit more of a faction which adds even more variety to the game.

Does the update have any specific influences?

As you can tell from the name Valkyrie, we brought in some vibe from Nordic mythology which always has been a bit dark and twisted, as opposed to the quite simple good-against-evil setting in the original Galaxy on Fire 2.

As for gameplay and features, we looked into not only the usual suspects of the sci-fi simulation genre but also first-person shooters that feature mines and guided missiles, for instance.

What's your favourite aspect of the update?

It is hard to say what strikes me the most in Valkyrie as there are so many great new things. I definitely like the new story and we spent quite some time to make it a truly immersive experience with all the dubbed dialogue.

My favorite part is probably when you enter a new system, though. I get really excited when I click on a new planet in the star map and the cut-scene using the hyperdrive or jumpgate takes me to the new destination.

It always blows me away when I arrive in a completely new environment that looks so stunning with the new backgrounds, the detailed planets, and the huge stations floating in space. 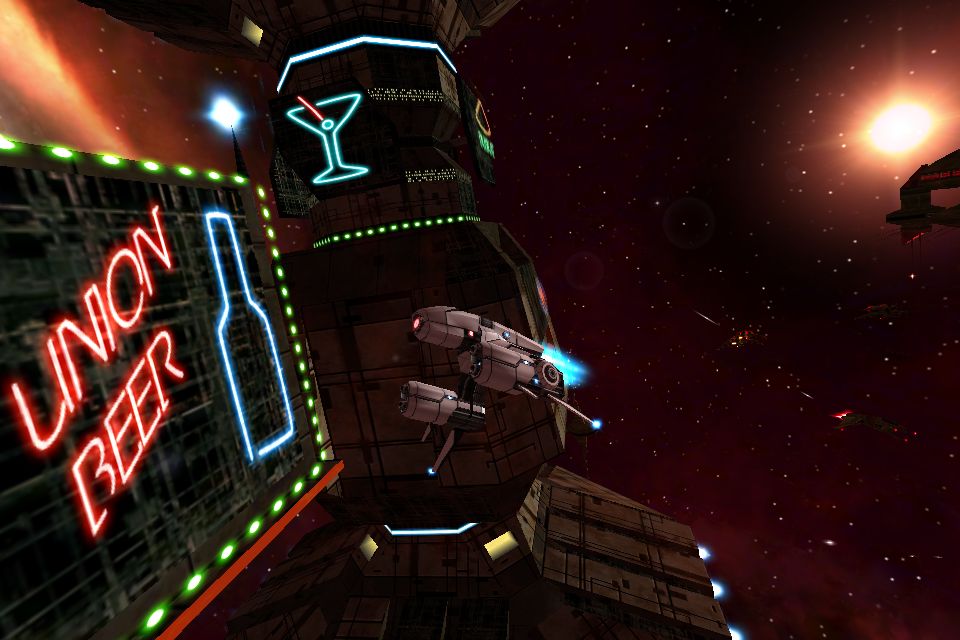 Can we expect more DLC in future?

The concept of Galaxy on Fire 2 is just perfect for adding more and more content to the game. We have a pretty long list of things to come, fuelled constantly by demand from our fanbase and by our own ideas.

As long as the community appreciates what we create within the Galaxy on Fire universe, we will provide them with lots of new stuff. Galaxy on Fire is by far our most successful IP for more than six years now and we've got big plans for it.

Can you reveal how much Valkyrie will cost?

We had a lively debate internally on how much we should sell Valkyrie for. It is such a massive add-on that it feels almost like a complete game. Every new feature takes quite a lot of time to be implemented, tested, and balanced carefully in an open sandbox-style game like Galaxy on Fire 2.

On the other hand, we are fully aware of the enormous price pressure on the App Store and the commercial success of other developers in adding just a few little things and charging 99c for it.

However, as I said before, we have a pretty mature audience that we believe has a pretty good understanding of what it takes to create an immersive sci-fi experience of that calibre and is willing to pay a reasonable price for some extra hours of great entertainment.

Will it be optimised for the iPad 2?

We are still working hard on the enhanced version of Galaxy on Fire 2 for the Tegra 2-powered smartphones and tablets which will be released pretty soon, too.

We have not decided yet whether we will bring a heavily enhanced version of the original Galaxy on Fire 2 to iPad 2 as a standalone first, or release it together with Valkyrie at the same time, or even a bit later this year when the iPhone 5 comes out.

Will Galaxy on Fire 2 be coming to Windows Phone 7 or any other portable gaming platform?

As said previously, we are a big believer in the joint venture between Microsoft and Nokia and we are eager to bring Galaxy on Fire 2 to Windows Phone 7 once the platform is mature in terms of install base but also when we have access to a fully native and OpenGL ES based programming environment.

However, it is much too early to talk about any other platform in particular, but we are very much interested in bringing Galaxy on Fire 2 to further platforms.

We want to engage new players and also to offer a cross-platform gaming experience to our existing fanbase.

Thanks to Michael for his time. Galaxy on Fire 2: Valkyrie will be out on April 28th.