Fowlst is one of those games that kicks into gear from the get-go. It's sharp and deadly, like a cross between Downwell and Super Crate Box.

The simple control system lets you poke your way through the game with no hassle whatsoever, but it also opens up to allow for some frantic and often breathtaking action.

It's not quite a shooter, it's not quite a dodger. It's something in between, and it's very, very good at filling that niche you didn't know you were looking for.

There are red monsters attacking you on each single screen level. Smash them all and you'll unlock the exit and move on to the next. And that's all there is to it.

Well, that's not all there is to it. There are also coins to collect, which you can spend on upgrading your angry chicken. Then there are special moves that downed enemies sometimes drop. 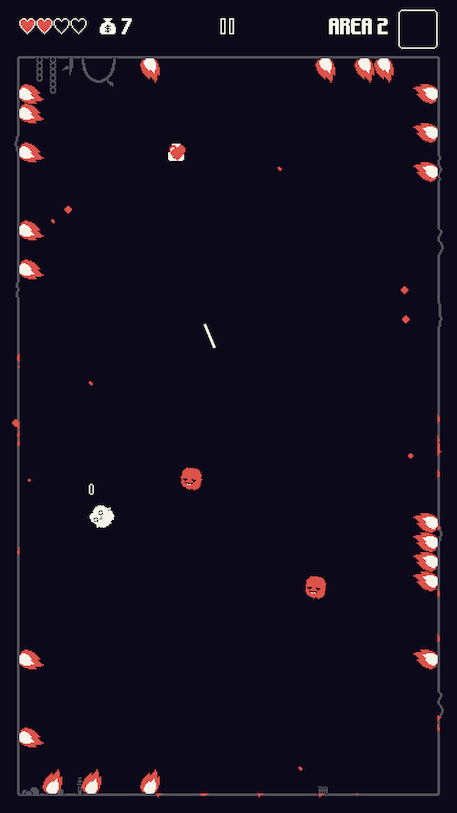 You use these by swiping upwards on the screen. Some of them freeze the bad guys, some of them set off a bomb. There are hearts that heal you as well.

The game darts along at a quite frankly ridiculous pace, and for the first few rounds you'll not get that far into the experience.

But once you get the hang of the enclosed spaces, of darting over the monsters to avoid their shots, and keeping away from the environmental hazards, everything slots nicely into place.

The whole thing races along with a beautiful precision. You'll push further and further in, getting stronger and stronger as you earn more coins.

And you won't be able to stop smiling the whole time. It's raucous and chaotic in all the right ways, tight when it needs to be, and never fails to push you back in for one more go.

If you're looking for a game to fill that crazed, arcade shaped hole in your life, then this one is well worth checking out.

A sharp not-shooter with some interesting ideas that's well worth checking out
Next Up :
REDMAGIC 8 Pro review - "A beast in performance, but not without growing pains"