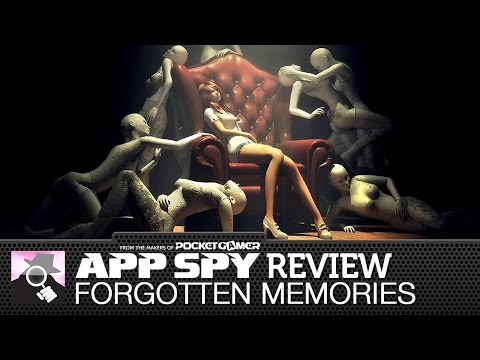 Subscribe to Pocket Gamer on
Forgotten Memories wants to be a psychological horror game. There's the creepy asylum setting, the flashlight that keeps running out of juice, and the odd skull to cave in with a lead pipe.

But it often feels more like a point and click adventure. You hunt the halls for keys and useful items, and yo-yo between different wings of the mental hospital, unlocking doors and solving logic puzzles.

You will get in fights with creepy walking mannequins and ghosts, but the combat is a bit mushy. Loud and messy and scrappy, but largely underdeveloped.

You'll probably die because you messed up the timing of your lead pipe swing, or the game didn't register you shaking your iPad to kick off a handsy enemy. At which point, you'll realise that the game is rather unforgiving.

That's because it's got a retro save system, ripped out of old Resident Evil games, where you manually save on a computer and use a very limited supply of floppy disks to record your progress.

It certainly ups the stakes when your death can wipe out half an hour of unsaved progress. But that doesn't gel with the way we play mobile games, and repeating content isn't just frustrating - it's also not very scary the second time through.

It's spooky enough the first time, though, as Forgotten Memories uses its puzzle-solving structure to cook up some good scares.

It knows exactly where you'll be heading back to when you pick up, say, an office key, and can deliver a well-timed fright just as you make a careless beeline towards the door.

But, seeing as all the spooky stuff can be erradicated with a swift pipe to the noggin, you won't be afraid for long.

The game's also got a relatively interesting story about sociopathic doctors and murdered nurses, with more to uncover if you find hidden letters and tape players. It's littered with typos and has some cringe-worthy dialogue, but it serves its purpose as eerie, scene-setting ambiance.

And that's what Forgotten Memories does best, as Psychoz has managed to craft a genuinely unsettling game with a moody atmosphere and masterfully engineered scares.

It's the overdone puzzles, lumpy combat, and punitive save system that let it down.

It's a well put-together tribute to survival horror games of yesteryear, but some underdeveloped mechanics hold Forgotten Memories back from greatness
Next Up :
Hero Emblems II review - "Lovely visuals and music, but match-3 combat lacks strategic depth"

How to fight your fear - Forgotten Memories walkthrough and puzzle guide