Gamescom '14 Quick Pick - Flame Over is a Vita pyro-roguelike, with some healthy Spelunky influences 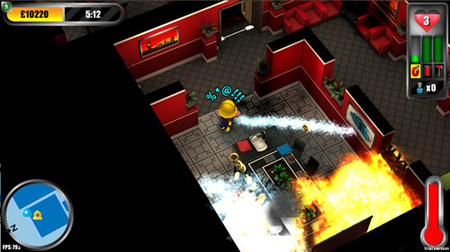 Developers looking for coverage on Pocket Gamer, take note: references to Spelunky (aka the best game ever made) will snap this editor out of his Gamescom stupor and get him to pay close attention.

And Spelunky's fingerprints are all over firefighting game Flame Over, such as the randomly generated rooms, having four levels in four themes, getting to rescue people, and even having a malicious one-hit-kill enemy that stalks you if you run over time.

But in terms of what you do, it's nothing like Derek Yu's game. Instead of raiding tombs and whipping snakes, you're fighting fires with water and foam. 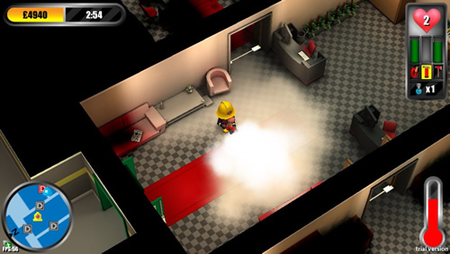 You stalk from room to room, putting out fires with a hose. It controls a bit like a twin stick shooter, and you can strafe left and right, or aim freely. Or just chuck a water bomb to quickly douse an entire corner.

You have to be careful because fires propagate. Every material has a different flammability rating, so fabrics, paper, plants, and carpets can go up in flames if you're not careful.

You can soak stuff in water, but suds are a precious resource and you don't want to waste time filling up your tank in a bathroom sink.

Because time is not on your side and - as we said - the grim reaper pops up and zeroes in on firefighting hero Blaze Carruthers and attempts to kill you. You can get more time by rescuing people (and more hearts by saving cats). 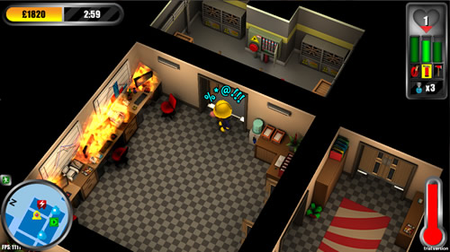 There are other threats, too. If a room becomes burnt too badly, it sheds its structural integrity and deadly ceiling tiles start to plop from the roof. And electrical fires are a nasty nuisance that require lots of foam, or for you to find and shut off a nearby fusebox.

Plus, later areas introduce new threats. A lab adds barrels that spill flammable gunk all over the floor, and a in factory area, jets of fire spurt out from the floor

It's a complex game, then, and filled with clever ideas. There's also a shop, miniature missions, and persistent upgrades. And it's suitably difficult, but like Spelunky you'll be wanting another go as soon as you die.

In fact, walking around the halls of Gamescom this week, Flame Over has been the game that has really stuck in my mind as I turn new strategies over in my mind. I, for one, will certainly be playing it when it's out later this year.

Flame Over gets its first Let's Play video demonstrating gameplay