Five Nights at Freddy's 3 is now ruining bedtime on iOS, too 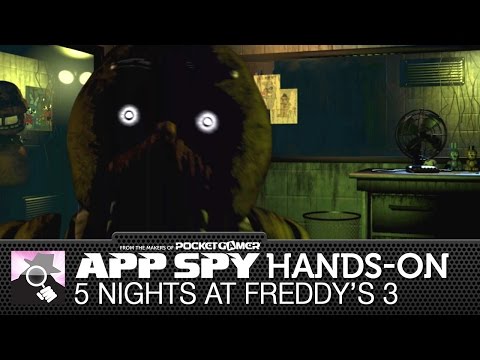 After a brief spell of Android exclusivity, jump scare proprietor Five Nights at Freddy's 3 is now available on iOS, too. It costs £2.29 / $2.99 and you can get it on iPhone and iPad right here.

This one is set inside a haunted house attraction, which is trying to squeeze a little more money out of the myths and legends surrounding Freddy Fazbear's Pizza. (Sound familiar?) And this time, there's only one animatronic nasty to hide from.

As ever, you're jumping from security camera to security camera, as you desperately fix doors and lights, and lure the robotic animal away from your hiding place.

Glen gave it a respectable Bronze and said, "half the time you're battling with obscure mechanics and the other, a flawed design decision. And that's a shame because it contains atmosphere, intrigue, and scares in abundance for those patient enough to stick with it."

Get Sorcery! 3, Game of Thrones, Five Nights at Freddy's 3, and more for free on Amazon Appstore

Here's what Five Nights at Freddy's 3 plays like on Android