Zombies are the best antagonists since Nazis went out of fashion. They’re the kind of bullet fodder that even the most just and noble hero doesn’t mind slaying indiscriminately.

Even the most self-righteous moral compass of them all - Superman - wouldn’t think twice about putting two red-hot eye lasers through a zombie’s rotting skull before boasting about it to Lois in the hope of scoring some tough guy action.

But it’s easy to chuck bullet fodder about the place. Zombies, used properly, offer a far more immersive gameplay and storytelling dynamic. A good zombie yarn is nothing to do with the zombies - they’re a mechanic used to separate the human survivors from man made concepts such as morality, fairness, right and wrong.

When a family member is no longer sentient, and simply an infected wild animal intent on eating your flesh as a snail eats a cabbage leaf - without care or concern for itself, its species, or the cabbage - we’re forced to evaluate our own position on the Darwinian ladder.

As cynical as it sounds, in the event of a zombie apocalypse we quickly come to realise that the only difference between us and them is that we know how to pull a trigger.

Here’s what the iPhone has to say on the subject. 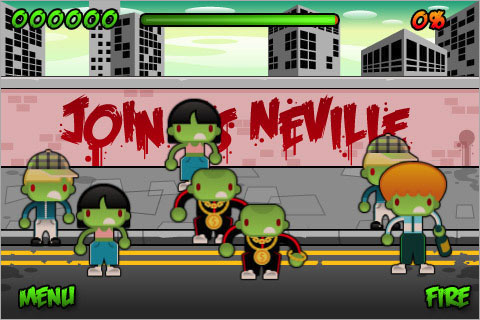 Where better to start than with a Burberry massacre on the back streets of Manchester in Zombie Chav Hunt. The speech impaired yoof on ve streets of England an’t never looked so sick, innit? So your task is to break out the sniper rifle and shotgun and take down anybody who wears a gold chain over the top of their T-shirt (don't pretend you haven't fantasised about doing so yourself).

As simple as the game is, with no worry of having one of these surly, undead, tracksuit-wearing miscreants chewing on your neck, spreading what brains they have across a brick wall as quickly as possible is immensely entertaining. Its success is largely down to the excellent accelerometer controls and the immediacy of its gameplay. 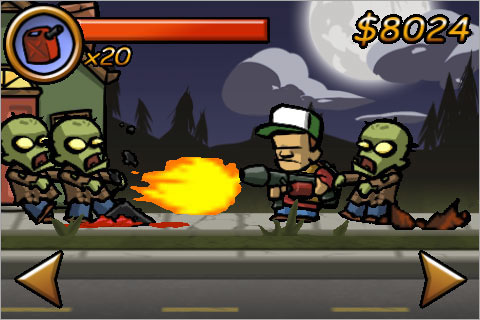 Now here’s a game with zombies in it - the gore, barricading yourself in houses, a redneck with a shotgun... it’s got everything. Well, that’s about it, really, but everything that zombie-based entertainment needs.

Taking a casual stroll in this 2D side-scrolling gorefest is as simple as it is amusing. The living dead leap from the ground right under your feet, and it takes a quick trigger finger to dispatch them with just your pistol.

But ducking into the houses on the street furnishes you with cash and weaponry, and once you break out the shotguns and uzis the flesh eaters don’t stand a chance. 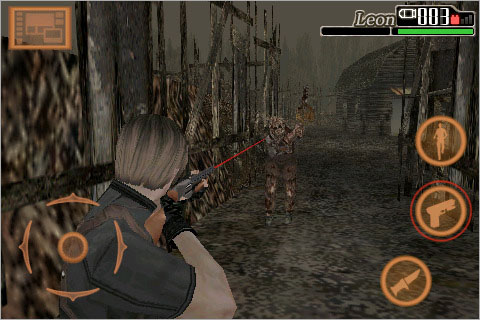 A new gaming platform has arrived only when it gets its first quality Resident Evil adaptation. Although it wasn't the first T-Virus outbreak on the iPhone, this streamlined conversion of the console classic retells Leon's gory excursion into the darkest corner of eastern Europe in top notch, 3D style.

It wouldn't be fair to say that corners had been cut, but clever shortcuts are being used to compact the levels and storyline into a fully featured yet condensed zombie hunting game.

Fans of the series might balk at the notion of this finest addition to the franchise being slimmed down, but it's a fair trade-off against shoehorning console-quality zombie slaying action into a handheld platform. 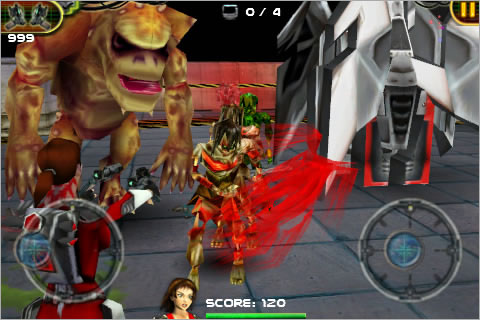 iDracula had a huge impact on the app store, finally making great use of on-screen virtual controls. Naturally the clones weren't far behind, and although ZombieHunter (previously known as 7 Days Apocalypse) follows very closely in the footsteps of the original game, it also boasts its own strong identity.

Setting two guns blazing (John Woo style) against a graveyard full of freshly reanimated corpses is difficult enough, but ZombieHunter adds an extra dimension to the hardcore survival gameplay by requiring you to also protect a scientist - and humanity's last hope for survival - on the way to her lab. 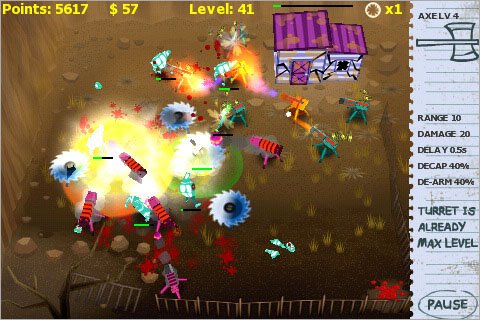 There’s no shortage of tower defence games on the iPhone, so deciding exactly what it is you'd like to train your vast array of defensive weaponry against - be it soldiers, aliens, vehicles or the undead - is a significant part of choosing the right game you.

Zombie Attack! combines some excellent tower defence features with a first-class zombie survival premise. The living dead shuffle aimlessly toward your ramshackle cabin, and it's up to you to place automatic defences in their path to slow them down and chop them into rotting meat.

Keeping yourself alive, the guns firing and the cabin standing, makes for an action packed and brutal variation on this overfull iPhone genre. 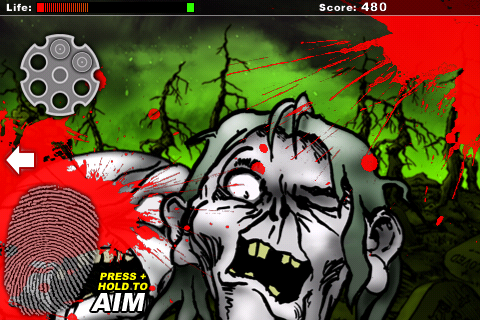 Shooting games are becoming more and more popular on the iPhone, with the accelerometer adding a degree of accuracy to the controls that not many gaming platforms can boast. Zombie Headshot focuses its gameplay on the steadiness of your hand as you attempt to fend off a horde of hungry flesh eaters.

These zombies attack from 360 degrees, meaning you not only need eyes in the back of your head, but the fast reactions required to line up your gun sights as quickly and put your attackers eyes in the back of their head make for a fast-paced game - only a direct shot straight through the middle of the skull counts. 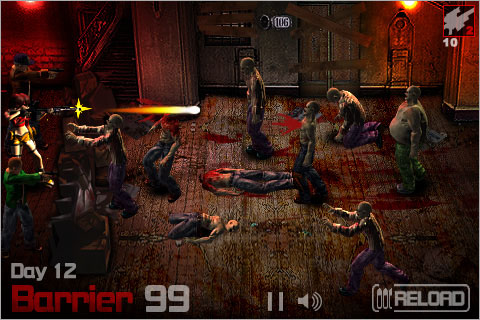 Despite its storyline reading like a 7-year-old’s “What I did on my summer holiday” essay, the concept behind Attack from the Dead is rock solid.

You’re holed up in a building, blasting the oncoming zombies before they reach your barrier until the dawn comes up and they go into hiding. You can then pick a building to search in the hope of finding new weapons, ammo, team members (who join you in the attack at night) and the scientist who can save you all.

With the Bluetooth co-op multiplayer and detailed, gory graphics, this is a great example of how much fun a bullets and brawn zombie massacre can be. 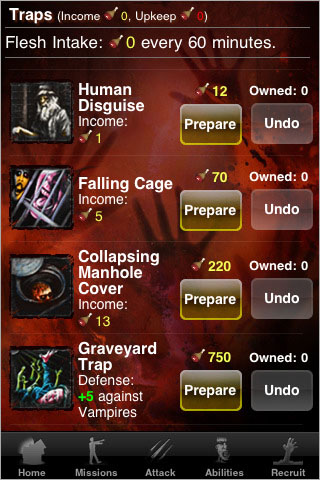 You can use any number of items to kill zombies, as contemporary entertainment has shown us, so why not use virtual dice and statistics to slay the undead? That’s what Zombies Live does, giving you an inside look at the life (death?) of the living dead.

Awaking in a morgue, it’s up to you to fathom out what this decomposing second chance is all about. But while you’re searching for meaning in your chronic mortality you need warm flesh to scoff, and begin to climb the ranks of the undead to become the leader of a shambling horde.

The crossover between Vampires Live adds extra depth to the gameplay that makes Zombies Live standout from the RPG crowd. 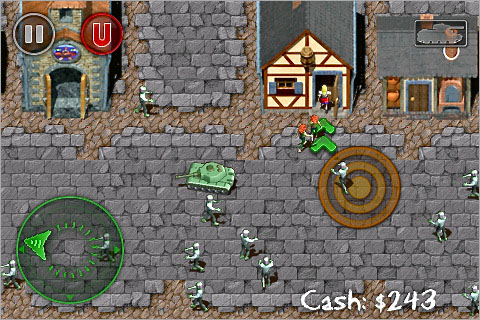 It actually makes perfect sense to hit the town, should the zombies apocalypse begin. There’s little else to do other than take refuge and hope the army eventually turns up, so why not go down the pub?

That’s what the lads are doing here - going from boozer to boozer - and it’s up to you to escort them and fend off the shambling legions of undead by blasting them and running them over in your tank.

Sure, some of ‘the lads’ occasionally fall underneath the caterpillar tracks, but it’s all in good fun and in the name of a nice cold pint. 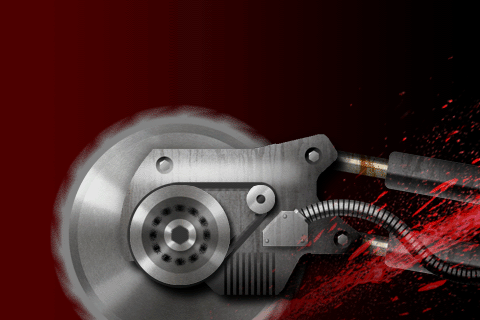 Okay, this isn’t a game, and it’s free, but it’s got to get a mention in any iPhone zombie run down. Zombie Saw is one of those essentially useless apps that gets more screen time than half the games out there.

You’re shown a rather nasty looking circular saw while holding the iPhone vertically, but tip it on its side and run it along your favourite appendage (your arm, for example) and the buzz saw kicks into action with a stream of hot blood flying from its blade and a tooth-gratingly ear-piercing noise as it cuts into virtual, undead bone.

It’s one of those apps you'll show folk down the pub who don’t have an iPhone, in an effort to convince them of why they need one. And if your mates are anything like mine, Zombie Saw would be all the proof they need.