Or soccer if you’re that way inclined

Try telling that to the legendary Brazil World Cup football team of 1982, Bobby: they didn’t even finish second!

The eventual champions of that World Cup, Italy, memorably defeated the Samba boys in the second round on a warm Barcelona evening, knocking Zico, Sócrates, Éder, Falcão, Júnior, and co. out of the tournament in the process.

Ask any halfway knowledgeable footy fan now, though, to name the Italian’s starting XI for the 1982 World Cup final, and they’d be hard pressed once Rossi, Zoff, and ‘Screaming Man’ Tardelli have been exhausted.

With this in mind, I was selected by the Pocket Gamer gaffer to scout for the ten football games on the App Store which left the most indelible impression. 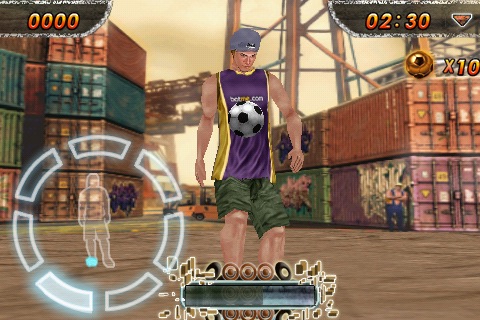 Ah, jumpers for goalposts. Lads playing kerbsies in the street ‘til the sun comes down. Mams screaming at Johnny to stop slide tackling in his new school trousers.

This doesn’t happen nowadays, of course, lest your sweater gets nicked, your road is lined with more cars than a Ford showroom, and Johnny skips school.

The makers of iSoccer Backstreet at Artificial Life have obviously picked up on this social deterioration, setting this collection of mini-games in a run down urban jungle. Street soccer fans can test their freestyling skills, dribbling chops, shooting boots, and even body balancing abilities by swiping, tilting, and tapping the iPhone.

iSoccer Backstreet even affords you the chance to destroy your dystopian ‘hood with just a ball, a heavy boot, and a rebellious heart. Presumably, you don’t need planning permission for this. 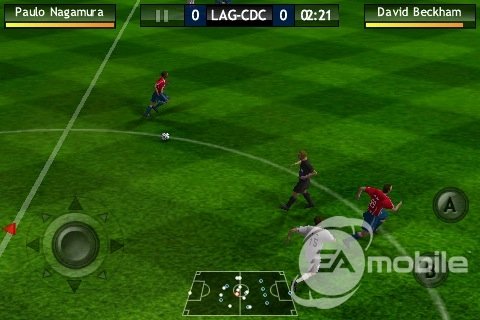 Until 2008, the FIFA franchise on home console was often derided as the style yang to Pro Evo’s substance yin in hardcore football gamers’ minds.

EA’s slick presentation is present on Apple’s handheld, whilst realism is addressed by the range of in-game options, from finesse shots to lofted through-balls. The control methods can be frustratingly tricky at times, but nothing that some after-training extra practice can’t remedy.

And FIFA 10 will afford you plenty of ways to conquer these complex skills with a similarly impressive wealth of licensed teams, leagues, and players to its desktop cousin. Be A Pro is even included, allowing you to create and follow your own superstar on the path to glory.

Though Bluetooth and local wi-fi give you the chance to dribble past nearby friends with ease, the continued omission of online multiplayer is one of FIFA 10’s only disappointments. 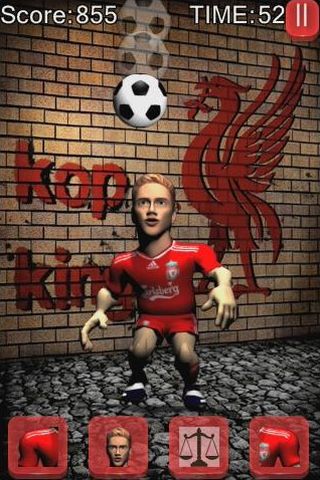 Without a manager and with high profile exits this summer on the cards, Liverpool FC is in something of a pickle. Perhaps the Anfield club can take some minor solace, then, in the excellence of this licensed time killer.

Choose from four of Liverpool’s current squad - Carragher, Gerrard, Kuyt, and Torres - as they try to ensure that the ball doesn’t touch the ground using all manner of body parts.

After honing their keepy uppy skills at Melrose, the quartet of superstars are given the opportunity to shine in Endurance, Freestyle, and general Show-off modes.

High scores can then be uploaded to an online leaderboard, giving fellow Kopites the chance to admire your unbelievable tekkers, and you the chance to compete for top-ranking prizes. 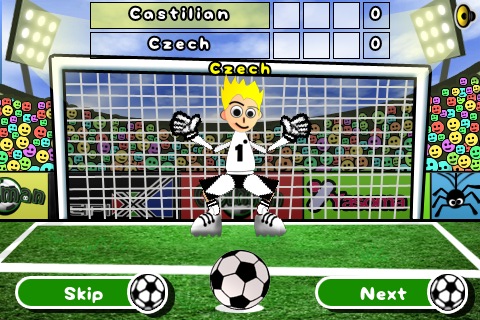 Penalty shoot outs. For many nations this nail biting series of shots from 12 yards serves as the final gripping act in an epic sporting drama. For an England fan it just spells D.E.F.E.A.T.*

Well, fortunately for the likes of Chris Waddle, David Batty, and Paul Ince, Golman doesn’t ask you to step up to the spot, but rather invites you to be the perennial penalty shoot out hero, also known as the goalkeeper.

Customise your ‘Golman’ with a David Seaman ‘tache and call out friends or the AI-controlled Golbot to a penalty saving duel. As a neat little twist, you can even preface your push notification challenges with some smack talk.

You’re s*it, and you know you are. 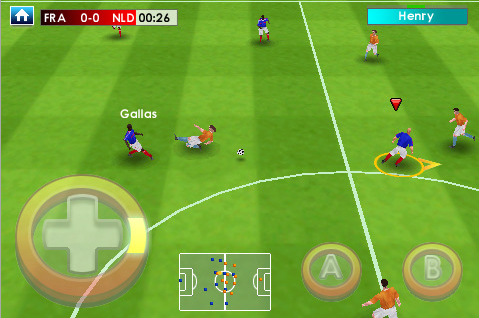 Like Luís Figo’s switch from Barcelona to Real Madrid at the start of the millennium, this could be considered a bold and controversial move.

By ignoring the claims of Gameloft’s successor, unsurprisingly named Real Football 2010, I have left myself exposed at the back, but I can counter. And quickly.

Whilst the impressive implementation of the virtual D-pad plus buttons and, therefore, the enjoyable gameplay are near identical across the series, the new features in the 2010 edition, such as online multiplayer and Enter the Legend, only serve to frustrate, rather than enhance, the experience.

Tilting the iPhone to take a throw on still brings a smile to my face, mind. 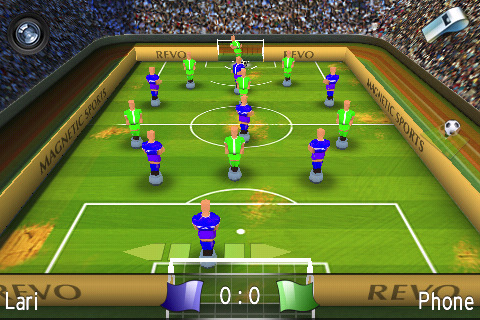 Re-popularised in the ‘90s by, of all things, Friends, table football is enjoying something of a resurgence on iPhone and iPad, too, not least with Illusion Labs’s very recent Foosball HD release.

In this take on the foosball genre, the iPhone's accelerometer is deployed to tilt the table, whilst in-game magnetic forces ensure fluid and precise build-up play, thus avoiding the rage at a ball marooned between two or even three midfielders for what seems like a eternity.

Rather impressively, Bulkypix has squeezed in all, and I stress all, conceivable forms of head-to-head combat, allowing two gamers to do battle over Bluetooth, local, and online wi-fi, 3G, and on one device.

Glorious wins against your buddies or the AI-controlled opponent can then be published, re-published, and published once more for posterity and bragging rights on Facebook.

Verdict - Lionel Messi (Argentina): the ball appears glued to his foot. FIFA should really check that out. SocCars (59p) 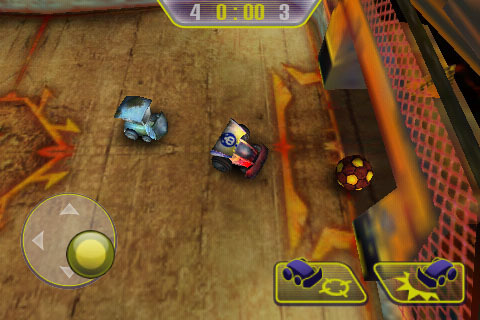 Fans of UK motoring show Top Gear will be familiar with the concept of car football games, having witnessed teams of Toyotas and VWs battle it out on a full-sized pitch four years ago.

If you missed that piece of televisual gold, however, don’t fret. SocCars on the iPhone essentially replaces footballers with cars, inviting you to get behind the wheel of ten different vehicles and drive the ol’ pig’s bladder into the opponent’s onion bag.

Unfortunately, games only last three minutes, which undoubtedly reduces the impact of in-game power-ups, such as ‘Rocket’, ‘Freezer’ and ‘Magnetic’. 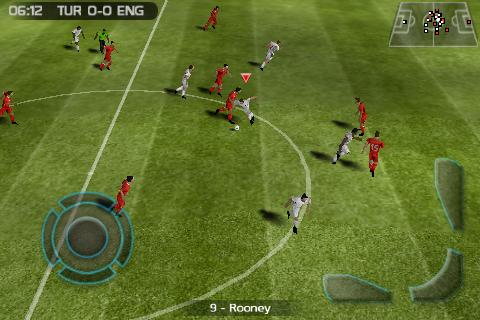 Ronaldo or Messi? Pelé or Maradona? FIFA or X2? Football gives rise to more conjecture than Marmite and Jordan combined.

What X2 Football 2010 lacks in licensing deals, it more than makes up for in playability, depth, and style.

Taking a similar approach to FIFA 10 in the measured speed of its action, the virtual analogue stick and contextual buttons encourage thoughtful, expansive play. Kudos to Exient for at least introducing online multiplayer into proceedings.

Unfortunately for the UK-based outfit, it suffers the same laggy fate as Real Football’s over the air action. Spins on two of my favourite features of EA’s long-running FIFA franchise, Be A Pro and Manager Mode, are notably absent, but the optimist in me wonders if these are being held back and, hopefully, perfected for the 2011 model. 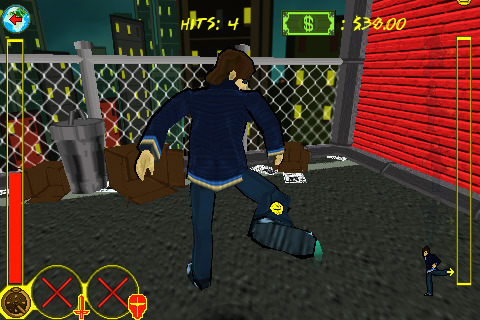 Before both the eco-warriors and the FBI pounce on me for promoting MoBros. Games’s solitary App Store release, let me clarify that neither trees nor PCs are harmed in the downloading of this game.

For the uninitiated, freestyle hacking or footbag encourages ‘hackers’ to perform combos of keepy uppy tricks with their little Hacky Sack in time to music.

In Hack The Planet you start off as Baloni Man, a free spirited fellow who curiously believes that the meaning of life can be found travelling the world and challenging opponents to hack-offs.

By defeating your eight footbag rivals across the planet over three rounds of hacking, you unlock their particular skills and hacks for purchase in the very relaxed atmosphere of the smoke shop.

After more speculation and anticipation than an Eastenders whodunit, I can report that Konami has done good.

The AI is unparalleled, the wealth of control methods unrivalled, and the visuals unmatched. If that wasn’t enough for you soccer nuts out there, the deliberate and considered pace of the game positively encourages players to outthink and outsmart the opponent.

PES 2010 is by no means perfect, though. No multiplayer of any kind is baffling, whilst incomplete licensing deals leave half of the available teams with strange, yet not atypical for long-suffering Pro Evo fans, monikers.

An update soon is promised by the game’s developer, so by the end of the Pocket Gamer iPhone Game Developers World Championship, some of the current criticisms may have been addressed. Keep your eyes peeled to the usual place for details, as and when.

Verdict - Eljero Elia (Holland): New talent on the scene.
Next Up :
Best upcoming mobile games in 2021