Welcome to another roundup of the best and worst in free apps for your iDevice, culled from the distant corners of the App Store.

This week we have funky rhythms, abstract tunnels, jolly tanks, macho gun-nuts, and random questions. In that order, too.

It’s easy – download the good ones, avoid the bad one. Oh, and have a good weekend. Don’t forget to do that, whatever you do.

Subscribe to Pocket Gamer on
Tapulous’s Riddim Ribbon puts the ‘game’ into ‘music game,’ focusing on steering a ball through a 3D maze rather than tapping to the beat. This meant that I enjoyed my time with it despite the music being the very worst kind of screeching urban-dance-pop (in my opinion, of course).

The idea is to keep your ball following a virtual breadcrumb trail, which undulates according to the music, by tilting your handset. Along the way the track can slip into a remix according to your actions, which is a very nice touch.

All in all, Riddim Ribbon is an excellent addition to the music game genre, and is certainly worth a go for free.

Think of Retro Revolution as a sort of 3D, abstract Canabalt and you’re half way there. The idea is to fly through a tunnel filled with coloured blocks, surviving for as long as possible by avoiding them.

The game adopts a first-person view and flight-style controls, so tilting your phone forward will cause you to dive. Accompanying the rather spacey action is a suitably repetitive techno soundtrack, which helps place you in the hypnotic 'zone' that such games demand.

Thanks to OpenFeint integration, Retro Revolution is a decent score-attack game – especially as it comes for free. 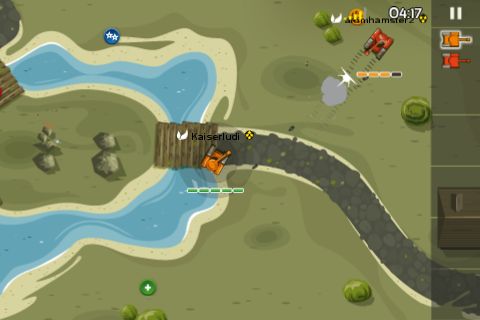 Everyone loves a bit of online multiplayer carnage, and Ping Tanks provides just that. It’s a gloriously simple top-down tank battler, but with just enough tactical depth to keep you coming back for more.

You drag your little tank in the direction you want it to go, while you can rotate your turret by dragging your finger anywhere else on the screen.

Firing at your real-life opponents is a question of tapping the screen. It’s a clever control system that proves easy to pick up, but your tank is awkward enough in its movements to require real skill to get the most out of it.

This free version provides unlimited replay value – purchasing the full version simply lets you skip the queue that you have to enter here. Although, given how addictive the game is, that’s quite an incentive to upgrade. 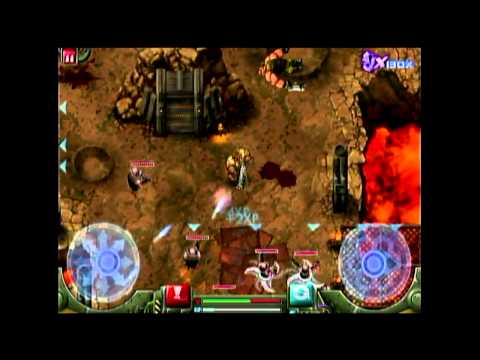 Subscribe to Pocket Gamer on
Jon Jordan took Gun Bros for a spin yesterday, and highlighted what an interesting proposition it is. At heart it’s a solidly made twin-stick shooter, but there’s a compelling buddy system that feeds into the whole freemium model.

In each fight you have an AI-controlled buddy virtually doubling your firepower (and taking some of the flak). Using Game Center, you can import one of your friend’s own customised creations to back you up. In return, they get some lovely bonus experience points and coins.

As hinted at, there are several RPG-like upgrade system at work here, and you can fastrack your progress by pouring in real cash.

Regardless of your views on the Freemium model, though, Gun Bros is an entertaining and well made twin-stick blaster, and well worth a download.

Find Out Your Nickname
By Reimund Lube
Type Full 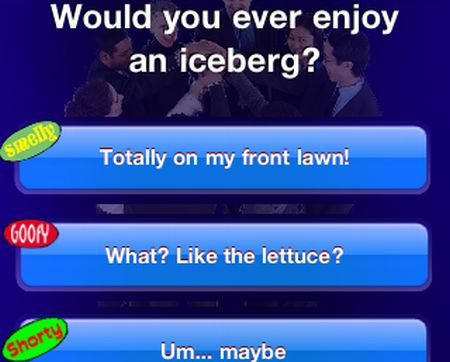 It’s hard to know where to start with Find Out Your Nickname. Let’s go with the title – that’s natural enough.

Not only is it completely misleading (more on that later), but there are two of the things. It’s called Find Out Your Nickname on the App Store, but go into the app itself and it’s What’s Your Nickname? What gives?

That really is the least of its worries, though. The app bombards you with a bunch of ridiculous questions, many completely nonsensical. “Do you find your thumbs useful?” “Would you rather have death or life?” and, my personal favourite: “Would you ever enjoy and iceberg?” are thrown at you supposedly to determine your nickname.

That’s what you’d think, anyway. The outcomes are equally stupid. Going through twice (which took some resolve, I can tell you) yielded the following answers. First: “SPORT – you definitely are sporty and cute too!” and second: “ZOMG – Like OMG but even better and recommended by zombies worldwide!”

What does that even mean? Ill conceived just doesn’t cover this particularly crap app.