$1.7M for Q1 estimated, much more on Android

From that point of a view then - a massive success for DeNA.

Reverse the situation, however, and DeNA had to spend $92 million to get a 20 percent stake in developer Cygames, to ensure it didn't start working with competitors like GREE.

On that basis, it's the internally-developed Blood Brothers that has been DeNA's real success in the west.

Keep in the family

Released in April 2012 and one year old last week, the game has been a particular strong performer on Android, which has accounted for the majority of its 15 million downloads.

But even on Android, Blood Brothers took several months to get up to speed in terms of monetisation. For example, it didn't break into the US top 100 top grossing Android chart until August 2012. 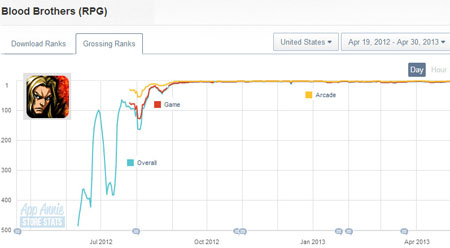 It's been there ever since, however, as can be clearly seen in the graph below. It shows the game sitting proudly in the top 5 chart for most of the past three months. 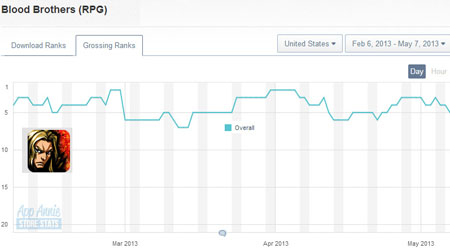 Bite from Apple When it comes to the iOS versions, Blood Brothers hasn't performed quite as well as on Android.

And, of course, the majority of activity has been on iPhone rather than iPad. For all its success, this is not a high quality graphical game, although it is one step up from the usual card trading and battling games.

Nevertheless, many developers would very pleased to release a game that's been yo-yoing between the top 20 and top 60 in terms of the US iPhone top grossing chart.

Indeed, according to market intelligence outfit Distimo, the game generated around $1.7 million during the first three months of 2013 on iPhone in the US alone.

You can also see the game's performance in the US iPhone chart over the past three months below. 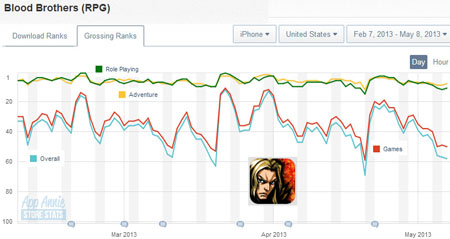 App Annie: Blood Brothers' top grossing US iPhone performance over the past 3 months

Target market Of course, given that Blood Brothers was specifically designed for the western market, it would be no surprise to find that the standalone Japanese and Chinese versions haven't been popular.

He also adds that a game for a Japanese audience would have offered less character options: Blood Brothers has eight character types to choose from.

Still, according to Distimo, while US accounted for about 35 percent of the game's iOS revenue in April, Japan is its second biggest market.

It's something that's also shown in the game's top grossing charts from Japan, on both Google Play and the App Store. 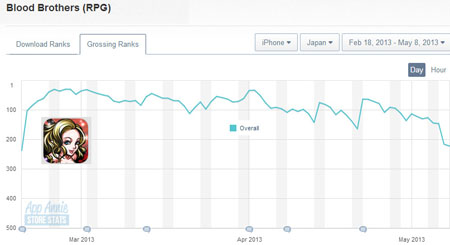 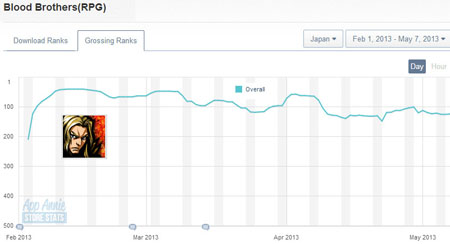 More to come Yet, for all its success to-date, what DeNA is most proud of is that Blood Brothers continues to operate at a high level of monetisation.

As it highlighted during GDC 2013, the game's live operation teams continue to run regular events such as Raid Bosses and special PVP events to keep players interested and spending.

Distimo reckons the game's weekly revenue total on iOS in the US has been steadily moving up, spiking at around $225,000 in late March. 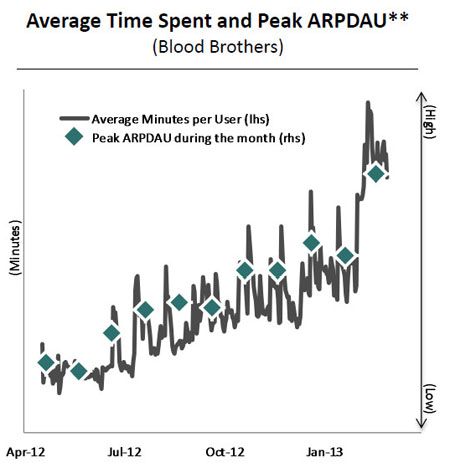 It's something Yuji Shimizu tacitly agrees with. "We don't believe it's peaked yet," he comments.
Methodology
Distimo AppIQ provides download and revenue estimations for any app worldwide, based on daily sampling of transactional app data (>3 billion downloads / quarter) and publicly available information. When calculating downloads and revenues for individual apps, Distimo's unique methodology excludes that app's transactional data from the analysis to preserve the confidentiality of their users' data.
Next Up :
Win a Alchemy Stars prize pack containing Luamber, Prism, Colossus Patch, and more in our latest giveaway