Liveblog: iPhone 3.0 gets unveiled by Apple 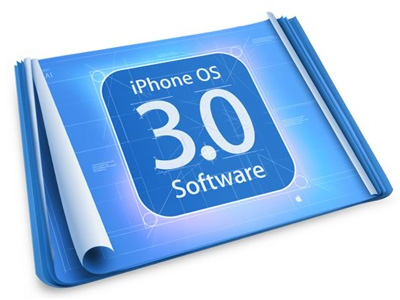 It's an exciting day for iPhone owners, with Apple unveiling the 3.0 version of its flagship handset's software at a media event in California.

Being a largely UK-based site, we're not there. But by gum, we know how to have dozens of browser windows open from sites that are, while synthesizing it all into a sizzling liveblog with our own opinions.

So that's what we're doing, from 5pm GMT today (10am PST). Check back here for full details of what Apple has planned for iPhone 3.0, including any new games features.

Latest gossip hints at cut'n'paste, MMS, push notifications and apps running in the background, a new 32GB iPhone, and the long-rumoured Premium App Store. Read on for what actually goes down.

16:15 GMT
It's at times like this that football livebloggers list team-sheets, but there's no news on who'll be in charge tonight. Not Steve Jobs, presumably, but it'll be interesting to see who takes the mantle - and whether they invite other companies to share the stage. Back in a bit.

16:37
Looking at the most popular rumours so far, the Premium App Store has most obvious relevance for games, but push notification could also benefit social games - think getting pinged when a friend has taken their turn in Anytime Pool.

16:46
It's all gone a bit quiet from livebloggers actually at the event. I imagine them to be fighting like cats in a sack for available plug sockets. The advantages of doing this from home remotely: 1.) cups of tea, 2.) a working Wi-Fi connection (*touches wood*) and 3.) If Tony Bennett turns up again, I can just turn up the new Super Furry Animals album. Not long to go now.

16:47
Feel free to comment as we go along, by the way - there's a box below. And I'm trying to simultaneously Twitter it at www.twitter.com/pgbiz. Because I am a self-perpetuating multimedia node.

16:50
Coldplay is the soundtrack at the event, apparently. Again. And in other news, my iPhone games publisher contacts are being impressively tight-lipped about tonight's announcement, so there should be some good games stuff in store.

16:53
Macworld reports that Phil Schiller and Greg Joswiak are at the front of the room, so it's the big guns (although, understandably, not the biggest gun of all).

16:56
Brian Lam from Gizmodo has discovered perhaps the ultimate way to liveblog while standing up. So simple, yet genius.

16:58
Attendees have been asked to silence their cellphones or pagers, reports Engadget. Pagers? Who in the modern world has a pa... Hang on, APPLE TO ANNOUNCE iPAGER... Maybe.

17:02
Things are underway with Joswiak. iPhone is in 80 countries now, and they sold 13.7 million of the handsets in 2008. That's 17 million iPhones overall, but 30 million devices if you include iPod touch. That's new - breaking out sales of the touch (13 million, I'm assuming).

17.06
Gameloft gets an early shout-out from Joswiak - more than two million paid downloads - while Trism developer Steve Demeter gets his own video up on the big-screen. He's worth more than Donald Trump now!

17.07
Some figures and estimates of individuals' financial worth may be exaggerated during this liveblog.

17.08
There are now more than 25,000 apps on the App Store, and 96 per cent of apps submitted are approved. Apple fighting back on the censorship accusations there. Although does that mean (*does sums*) that over 1,000 have been rejected?

17.09
Ah, that 96 per cent figure is only for the last month. 98 per cent of those have been approved in under seven days, and most importantly, the App Store has now generated more than 800 million app downloads since launch.

17.13
First big news - In App Purchase. Allows new ways of paying for / within apps. So extra levels and content in the context of games, which developers have been calling for. Micro-payments a-go-go! And subscriptions. The example given is buying ten levels for $1.99, but presumably developers can set whatever price they want - it all goes on the user's iTunes bill as normal.

17.15
The rev-share on In App Purchases is the same as regular App Store - 70-30 in favour of developers. However, it can't be done inside free apps - could that be an issue for social games developers? Maybe they'll just charge a nominal fee for the app (£0.59 for example) so they can do micropayments later.

17.17
Next new feature: Peer to Peer connectivity, which has a strong gaming angle. Find other iPhones near you (Bluetooth range) running the same app, form an IP connection and play each other. It uses Apple's Bonjour tech. Games are doing this via Wi-Fi already, presumably it just makes it a bit friendlier. He specifies it's not just for games though.

17.19
Next up is accessories, and allowing accessory makers to make custom apps to control that device. The demo showed speakers and music apps, but I'm thinking this could be just the ticket for Zeemote-style iPhone gaming controllers. but also other gaming-focused peripherals - Scott demos a blood pressure reader that can interface with an app. Sod medical reasons - I want something like this to hook up with Metal Gear Solid Touch!

17.21
Okay, Maps next. Apple has made the iPhone's map application into an API that people can use in their own apps. Can't they already do this with Google Maps? But anyway, it could be interesting for location-based games.

17.22
My toddler has just turned up. I wish I could say he's as excited as me about the future for iPhone gaming. But he's not. He's trying to climb out through the cat-flap. Kids, tsk...

17.24
Okay, so you can do turn-by-turn navigation stuff too, with the new API. But not using Google Maps. Presumably Google can do it with Google Maps though.

17.25
Next new feature is... push! No, I'm not talking to the toddler. Scott says Apple tried to do push notification last year but canned it, in order to "re-architect the server structure". The same goes for background processing, which he says overly drained the iPhone battery life (which, let's be honest, drains fast enough already if you're a power user). I said that last bit, obv.

17.27
Ah, I see. So apps can't run in the background, but they can use Apple's push notification system to ping the user - thus saving that precious battery juice. Social games developers will be particularly keen on this - think Who Has The Biggest Brain? or iMob Online pinging you when a friend beats your score / kills you.

17.31
And now some demos from developers who've been given early access to the iPhone 3.0 software. IM firm Meebo is up first, talking about various new features.

17.35
And now EA. Get in! The Sims 3 will use some of the new features in the iPhone 3.0 software, including the In App Purchase feature, where you'll be able to buy virtual items for your Sims for $0.99 in the US. Hey, I wonder if the reason for the delay of the Need For Speed iPhone game is due to wanting to include this kind of thing in that, too...

17.37
Also, you'll be able to play music from your iPhone's library from your hi-fi in the game. Nice.

17.42
And now ESPN, which is bringing its sporting alerts application to iPhone, comlplete with streaming video. DE-FENSE! Is that right?

17.45
A glucose-monitoring app now, which although very welcome for diabetes sufferers, doesn't have direct relevance to games. But just to recap on the gaming news so far today: in-game micropayments for virtual items and extra content; easier Peer to Peer multiplayer; games can access the iPod music library on the device; support for dedicated hardware accessories; in-game voice chat; a rumble API; and push notifications.

17.50
Actually, while the glucose demo goes on, I'm wondering about the scope for an iFit type game - a Wii Fit for the iPhone generation, with an accessory that tracks your pulse rate and so on, feeding it into a game structure...

17.51
Now ngmoco are on-stage - back to games! Boss Neil Young takes the stage and talks about "social play and new gaming experiences". This should be interesting. He's showing two games: Touch Pets and LiveFire. The former is a pets game with social features, while the latter is a multiplayer first-person shooter. Sorry, *adopts journalistic cloak of hyperbole* IT'S A QUAKE-KILLER!

17.54
From the screenshot on Engadget's liveblog, Touch Pets looks very Nintendogs. But it'll use push notification to let you know when your dog has sniffed the behind of gone on a date with someone else's dog.

17.56
Now LiveFire, that HALO-KILLING QUAKE-KILLER that I was talking about. Touchscreen controls, and push notifications to invite friends to deathmatch. Plus micro-payments to buy better weapons to grind them into the dirt. I do wonder about this kind of thing though - without correct balancing, this could leave players feeling they have to pay to have any chance of competing.

17.58
In-game voice chat too. For anyone who's happy to sit on a train shouting "WHO'S THE DADDY? WHO'S THE DADDY! EAT MY FLAMING WEAPON, BEE-YATCH!" during rush hour. I do that already while playing Football Manager Handheld on PSP, mind.

18.00
Smule is up next, the firm behind Ocarina. They've already squeezed a lot of social features into that app, so what they have to say should be interesting.

18.01
It's an app called Leaf Trombone: World Stage. Yes, it turns your iPhone into a trombone, with a slider on-screen and you blowing into the microphone. Be warned, tromboning on rush-hour trains is generally frowned upon too. Don't Google that, I beg you.

18.04
The demo featured two grown men performing a trombone duet of The Phantom Of The Opera on their iPhones. Think Different? I'll say.

18.05
Okay, enough apps, more features of the actual software. Cut'n'paste is included, which will please all of the blogbores who've been banging on about it for months. I can't think of a single time I wanted to cut'n'paste anything on my iPhone ever since getting one. You?

18.09
Copy'n'paste works inside third-party apps. Not really a games angle on this. Imagine if you could cut'n'paste characters from Rolando into LiveFire and use them as ammo though...

18.13
Okay, some more features that'll be welcome for iPhone users. All the main apps can now be run in landscape mode, including Mail. Hurrah! Also MMS is now included, and the ability to record Voice Memos. It's a pretty comprehensive update so far.

18.17
Also support for shared calendars, some tweaks for the Stocks app, and search has been improved to work across all apps, including Mail. The latter happens in a new dedicated home screen called Spotlight. Stereo Bluetooth is now also supported - check this slide for a bunch of other new features.

18.25
Okay, Greg Joswiak is back on-stage - is there a 'One Last Thing' moment in store? Or will he just say when the 3.0 software is available? I'm assuming not tonight.

18.26
TONIGHT! Well, a developer beta is available tonight. You have to be in the official iPhone developer program to get it though.

18.27
And Apple confirms that it's launching the App Store in 15 more countries, taking it to 77 in total. But the iPhone 3.0 software will be available to consumers "this summer" as a free update - and it'll support original (i.e. non-3G) iPhones too, albeit not with all the features.

18.35
Into the Q&A now, and someone asks why no Flash for the Safari browser. It's batted back - no announcements for now. A bit of a shame for anyone hoping for browser-based iPhone games to take off.

18.39
Read their lips: No New iPhones. Not today, anyway. And no netbooks either.

18.45
The Peer To Peer feature lets users see each other's iPod libraries, although whether they can play them appears still in doubt. Squabble over whose tunes to play when having a local multiplayer match?

18.51
And that's a wrap! Thanks for reading - let us know your thoughts by posting a comment below.