iPhone gaming: everything you need to know

We sort the hard fact from the rampant speculation

The iPhone hype-bandwagon is well and truly cranking up this week, leading up to Friday's US launch of Apple's first mobile phone. Thus far, most of the attention has been focused on things like the iPhone's slick user interface, its lack of 3G, and the nifty Web 2.0 applications that'll be preloaded on it (such as YouTube).

What about games? Apple has said absolutely nothing about iPhone gaming – what it'll be capable of, who's making games for it, and how they'll be made available to iPhone owners.

So it's not surprising to see that information gap filled by a fair amount of speculation, culminating in recent rumours that Nintendo will be releasing a series of iPhone games at $29 apiece.

Mario on a non-Nintendo platform? Surely not! Yet the rumour spread like wildfire, hinting at the dearth of information on iPhone gaming.

We're frankly dubious that Nintendo would partner with Apple, despite the clear crossover between the touch-screen iPhone and the DS. So what are the hard facts about iPhone and games?

First, it seems fairly clear that you WILL be able to buy iPhone games through the iTunes Store, as you do for iPod games. One techie has even dug deep into iTunes script files and found messages relating to synching games from iTunes to a mobile phone. It's not a shocker, to say the least, but it does confirm that Apple at least has some gaming plans for iPhone.

So who's making games for iPhone? Apple might not be saying, but publishers have gone on record with their views. For example, former EA Mobile boss Mitch Lasky told Business Week that EA was in negotiations with Apple.

"We have been talking to Apple about games on [the iPhone]… We see a lot of the technology that we've utilized on the iPod side being incorporated into the iPhone."

Of course, EA has been one of the key publishers of iPod games, as has Namco Bandai Networks in the US. Its VP Scott Rubin has also talked publicly about the publisher's intentions for iPhone, telling Gaming Bits that the company was working on titles.

"We are without a question one of the handful of game publishers that Apple has chosen to work with, and we're also a top partner of Cingular, who will be selling the device. At this time, there hasn't been too much information in terms of games... If the opportunity is there, we will put our games on the iPhone. It's our mission."

Elsewhere, established mobile publishers like I-play and Player X have talked publicly about the opportunities offered by iPhone, while following Gameloft's recent release of Lost for iPod, it stands to reason that it would be interested in bringing games to the iPhone.

PopCap Games is another iPod publisher whose casual games would be a cinch for the iPhone – we're already dribbling at the thought of how the slidey Chuzzle Mobile would play using a touch-screen. But this still falls into the realm of speculation. 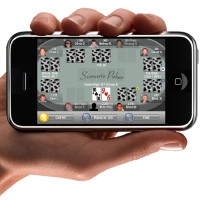 Meanwhile, Scenario Software has a website for its Scenario Poker game (pictured), which is claimed to run on iPhone and Apple's Dashboard application for Mac computers. There's even a preview of how it'll work on the iPhone.

Meanwhile, the iPhone Application List website has three other games listed – Avalanche, iTouch and WordBreaker – as well as a cheeky LivePhone application which connects iPhone users to their Xbox Live accounts.

One thing seems clear: Apple is looking to mobile and casual game publishers, rather than its established base of Mac games developers, when it comes to iPhone. Earlier this year, Joystiq talked to a bunch of established Mac firms, and they all had similar sentiments:

"We know nothing," said Freeverse's Colin Lynch Smith. "I don't hold a great deal of hope that the [iPhone will] be an open platform," said Feral Interactive's David Stephen, while Aspyr Media's Leah Heck seemed keen, but hardly optimistic: "Apple obviously holds things very close. ... It seems like a natural progression of things for us, [but] at this point, we have no plans."

So what are the facts we're left with? In short: there WILL be games available for iPhone, they'll be sold through the iTunes Store, and they're likely to come initially from the same companies who've been making games for iPod. But there's a healthy base of developers out there who'd like to make iPhone games too, so it remains to be seen if Apple will let them into its ecosystem.

And Nintendo? Your guess is as good as ours. Don't expect iPokemon to be available at launch though.