Hands on with the iPhone 2.1 firmware

Is it the answer to our prayers?

When Steve Jobs announced the iPhone 2.1 firmware update earlier this week, he certainly didn't play it down - stressing that it fixes "lots of bugs", and calling it "a big update".

Well, it's certainly big, at a whopping 237.8MB. It's barely a month since we downloaded the 249.2MB 2.0.1 update, so Apple is certainly putting our broadband connection through its paces.

I grabbed it around 3pm UK time, and it downloaded without a hitch. It'll be interesting to see if that lasts, once millions of iPhone users hit Apple's servers in the coming hours.

The first thing it does, of course, is backup what's already on your iPhone: 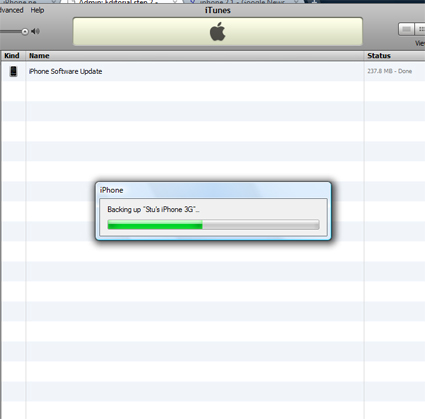 This took quite a while, presumably because it was backing up the iPhone using the old firmware, before installing the new one (which makes backup faster). D'oh!

Once that was finished, though, I installed three large Gameloft games, to see whether the installation speed has been improved. Weeeelll, it's still not super fast, but the progress bar at least moves while you're watching it.

More importantly, it didn't crash - it's at this point that my iPhone has tended to bork, particularly when I've tried to install multiple apps that are quite big. That's one tick mark for Steve Jobs and colleagues.

Another big tick goes to the backing up process, which is Usain Bolt speed compared to the previous firmware. I've seen claims online that it's up to five times faster under 2.1, and I'd go along with that - the progress bar zips along. 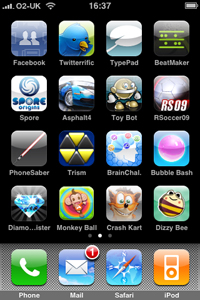 No more hitting 'cancel' as soon as the Backup process starts for me. Better still, the cumulative result of these fixes is that I can whack all those apps I bought back onto the device, hopefully in the knowledge that they won't bork it.

The final improvement that concerns us is the apparently improved battery life. It's early days, but having spent half an hour playing a few games to give the battery a run-out, there does seem to be an improvement.

If you're a heavy iPhone gamer, you're still going to be recharging the handset whenever in reach of your computer, but we should be able to squeeze out some more gaming on the train / plane / wherever.

So, initial impressions of the iPhone 2.1 firmware are very good, although whether it delivers on those 'crash-free' promises will only become evident over the coming weeks. Rest assured, we'll keep you posted on that.

Meanwhile, of the non-gaming features that have been added, Genius is the most interesting. It's Apple's music recommendation technology, although it's simpler on the iPhone than on the iTunes PC/Mac application.

Instead of recommending you songs to buy from the iTunes Store, on the iPhone it's just about you picking a track, and then having a playlist put together for you of similar tracks on the handset. Nifty!

Keep up with the latest iPhone news and reviews in our dedicated iPhone section.
Next Up :
Figure Fantasy: What to expect from the epic Ultraman Tiga collab