Beware the DS pirates on eBay

How to spot a fake

One of the joys of looking after the DS section of a European-centric website is you spend a lot of time studying the Japanese and US release dates of games you know won't surface over here for months.

Hence the need to trawl the various game import sites, to ensure we keep up-to-date with the latest reviews. But what with the downfall of Hong Kong-based games importer, Lik Sang, we've increasingly had to rely on the Wild West environment that is eBay.

And we were unpleasantly surprised when one of our most recent purchases, Mario Hoops 3-on-3 (due to be released in Europe as Mario Slam Basketball on 16 February), turned out to be a fake.

Perhaps the best clue was the price – the 'Buy-it now' price was £4.99, with P&P at £12 – which was significantly lower you'd expect for an import DS game. However, the seller, heyh_sz, seemed like a good bet. A member since 7th December 2004, his feedback score was 990, of which only 16 were negative.

The game arrived promptly, too. And when trying it out, it worked fine. Only some close attention to the goods revealed its counterfeit nature. 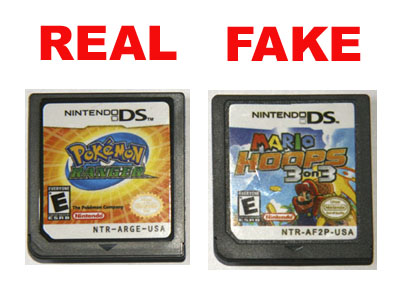 From the front, the pirated game cart itself (right) looks quite similar to a real import game (in this case Pokémon Ranger, left). One subtle difference is the cutoff on the bottom left hand corner of the sticker on the fake is slightly more rounded then it should be.

The differences become more obvious when you turn the cart over. 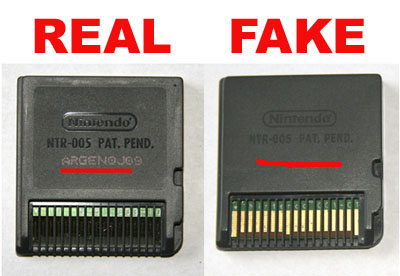 The first thing to notice is that while the fake says 'NTR-005 PAT(ent) PEND(ing),' it doesn't have an individually printed number beneath. The back of the cart is smooth, not indented like the real game, too. And finally, although impossible to see on this resolution of image, the bottom of the PCB board on the fake says 'Nintendo 001-01' instead of a more complex manufacturer code (in the case of Pokémon Ranger, it's I N-5 003-10).

The game box of the fake was also made of lower quality plastic – it felt cheap – and didn't have an official Nintendo logo embedded next to the game cart holder. 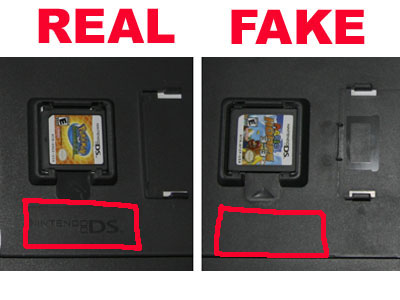 Finally, the quality of the printing of the cover and instruction manual was much lower than an official game. In fact, in the case of this fake, the instruction manual was actually just a game review from a US website. Being real gamers of course, we only bothered looked at the manual last, even though this was the biggest give-away.

Heading back to eBay to make our case for getting heyh_sz kicked off, we found he'd already been removed. Indeed, checking through his feedback listings, it was clear he had already been pointed out as an alleged seller of fake/pirated games by a couple of other buyers.

So the moral of this story is if it's too good to be true, it probably is. Of course, sometimes you do get bargains on eBay and other import game sites, but it's always worth doing a bit of digging around, especially on eBay feedback, if you're suspicious.

You might also want to read our guide on how to import DS games.
Next Up :
The best new mobile game of the week: Rocket League Sideswipe - 3 December 2021