Battle of the iPhone XBLA rivals: Open Feint versus Plus+

Which of these iPhone gaming services gets top billing?

OpenFeint, Plus+, Crystal, Gameloft Live, Scoreloop, Geocade - there's been a glut of social gaming networks cropping up on iPhone to the point that it makes your head spin. When the whole goal of creating a gaming network is to provide a central destination for gamers, the launch of half a dozen platforms only seems to do the opposite.

Fragmenting iPhone gamers is contrary to the spirit of these ambitious networks. So which one is worth your time? While Crystal, Gameloft Live, Scoreloop, and Geocade are all deserving in their own respects, we're setting our sights on Open Feint and Plus+.

Both platforms have received an enormous amount of attention over the last few months and we're here to discern which is tops.

Across four categories - Interface, Achievements, Social Networking, and Communication - we break down whether Open Feint or Plus+ has the edge. Our goal isn't to defame one platform or the other: we're just interested in pushing both (and the other four listed above, too) to improve and be competitive. Once you've read through our analysis, have your say by leaving a comment or posting in the forum.

Green and black colours run throughout OpenFeint and its multi-layered interface. Tabs run along the bottom of the screen held in either portrait or landscape mode (depending on the game's orientation), providing access to chat rooms, game-specific information, your friends list, a list of the games you own, and general settings. Icons are joined by text, so you know precisely what you're accessing. 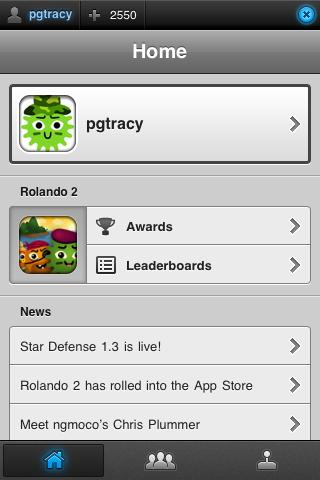 Landscape mode provides a nice widescreen view, though it cramps the space vertically and requires frequent scrolling to view all available options and text on a given tab. We much prefer games that use OpenFeint in portrait mode. There's one catch here, however: the tabs that run along the bottom of the screen are small, causing the text within to be squeezed.

Fortunately, that's not an issue at all with Plus+, which only runs in portrait. The sleek steel-coloured menus give ngmoco's network a more sophisticated feel that is matched by the intuitive nature of navigation.

Everything is easily accessible, each menu item popping onto the screen noticeable faster than in OpenFeint. Additionally, nothing has been jammed onto the screen and there's plenty of room for every element that appears.

Plus+ unlocks the achievement for 25pts: Plus+ unequivocally holds superiority over OpenFeint in terms of interface design. Sleek menus, clever icons, and greater speed make it a better experience for the user.

It's not that OpenFeint is clunky or hard to use; on the contrary, it works well. The issue comes down to easier navigation in Plus+ and more appealing aesthetics.

A tip of the hat, first of all, to Microsoft for revolutionising games with the brilliant invention of achievements that now finds its way onto iPhone. They make games just a bit more enjoyable, encouraging replay in games that would more than likely been left on the shelf to collect dust. 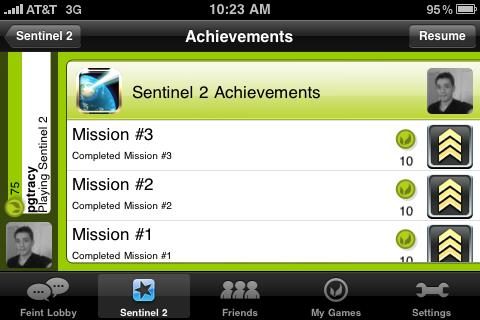 Both OpenFeint and Plus+ feature them, though structured in markedly different ways. Like Xbox 360, where each game must adhere to a strict limit on the point total and number of achievements offered, OpenFeint caps titles to 1000 points. How those points are doled out is left to the developer, but every game has to follow this basic guideline. 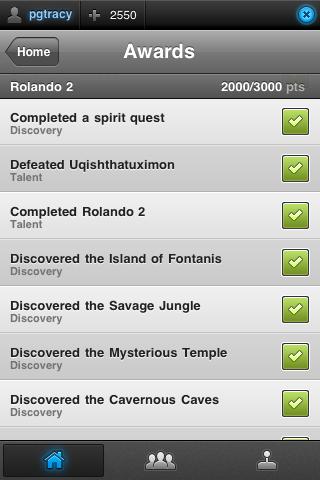 That's different from Plus+ where there's no apparent consistency in how achievements are implemented. Only two games currently support Plus+ (Star Defense and Rolando 2: Quest for the Golden Orchid), each possessing a different point total and number of achievements.

The reasons behind the difference aren't clear, but it would seem the gap between Star Defense's 1500 achievement points and Rolando 2's whopping 3000-point total is unnecessary.

OpenFeint unlocks the achievement for 25pts: Standardisation is vital to ensure a level playing field for all games supporting a given platform. Giving more achievements to Rolando 2 provides an incentive for you to play that game over Star Defense. Consistency gives OpenFeint the edge here, and it unlocks this achievement with ease.

The purpose behind both Plus+ and OpenFeint is social networking: bringing iPhone gamers to a central network that enables easy access to communication, information, and a place to tout in-game accomplishes. Both networks succeed in this fundamental goal, though one has a decisive upper-hand. 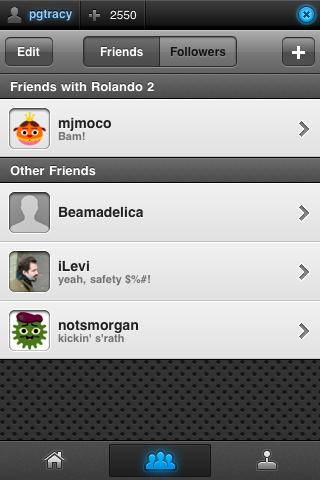 Push notifications have given Plus+ a sophisticated social tool, yet it's been leveraged only in Rolando 2. The promise of new games featuring seamless push notifications is alluring and could propel the network much further than its current position.

Much of the social networking over Plus+ relies on acquiring friends and followers, the latter an idea exclusive to ngmoco.

OpenFeint resoundingly beats out Plus+ when it comes to social networking because of the array of options it offers. Instead of opting for a 3.0-only social network, the platform brings in Twitter and Facebook.

You don't have to spend time finding friends as in Plus+: instead, you're able to import friends from your Facebook profile. This not only makes it effortless to socialise within the network, but it also has the effect of evangelising to those not using OpenFeint with notifications over Facebook and Twitter proclaiming high scores and such.

OpenFeint unlocks the achievement for 25pts: Plus+ may have the cutting edge with push notifications, but it can't beat the ubiquity of OpenFeint's leveraging of Twitter and Facebook. It seems likely that push notifications are the way of the future, yet OpenFeint is seizing the moment now by leveraging social networking services that are widely popular.

It's great to have a bunch of friends, but if you don't have a way to brag about all of your achievements then all the social networking in the world is pointless. Communication features are critical to any online platform, particularly Open Feint and Plus+ that reside on a device built around the concept of making communication easier. 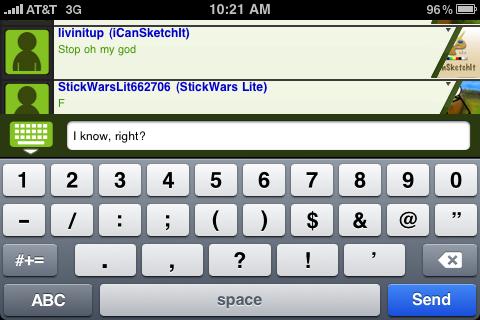 Neither OpenFeint or Plus+ employ compelling measures to address the need for communication, though the former succeeds in delivering more on this front. Text-based chat gives OpenFeint some form of communication among users.

Chat rooms for individual games, developers, and the general community encourage conversation. That said, there's not much discussion going on in these chat rooms. Instant messaging, which is absent from OpenFeint, would probably see greater use. 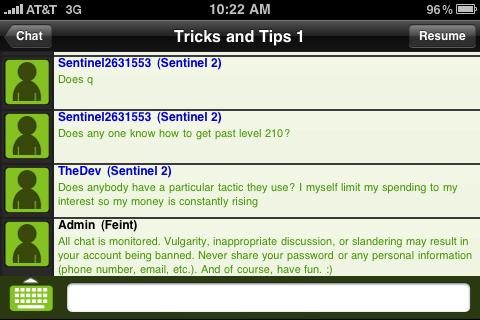 Plus+ brings very little when it comes to communication, sadly. Instant messaging is nowhere to be found. There aren't any text chat rooms. The only way in which you can interact with friends and other users is to add them as a friend, drop them from your list, or to report abuse.

OpenFeint unlocks the achievement for 25pts: Both platforms have a long way to go in fulfilling the need for communication tools. The clearest next step would be the implementation of a messaging system to allow users the ability to send notes back and forth among friends and followers.

Plus+ appears closest to supporting such a feature considering it already has push notifications. Right now, however, OpenFeint has the upper hand.

Nabbing three of four categories, the momentum appears to be with OpenFeint. The wide range of features that it provides from chatrooms to the ability import friends from Facebook to standardised achievements make it a coherent, streamlined platform.

Improvements can certainly be made: instant messaging, push notifications, and other new elements are likely to be incorporated soon.

To say that Plus+ is dismal second finisher would be extreme, yet it's clear that it has a lot of ground to make up. Not only is it quite behind in the number of supporting games, it fails to beat out OpenFeint in every critical category. A slick look isn't enough to satisfy gamers. Better features and more options are necessary if the network is to take on OpenFeint.

OpenFeint with 75pts. versus Plus+ with 25pts: For now OpenFeint is the preferred network, though we're interested in seeing how things change in the coming months and whether Plus+ can turn the tide or if a newcomer will ride a new wave to the top.
Next Up :
Heroes of Crown: What to expect from Woobest Game's 3D idle RPG