There's no denying that iOS is the biggest mobile gaming platform around right now. But Android is in second place, and closing fast.

And Google's seemingly ubiquitous smartphone platform is more than just a plucky runner-up in the field of smartphone gaming. In fact, it actually offers a superior experience to iPhone and iOS in a number of key areas.

We're not saying that Android is the best platform for smartphone gamers. It quite obviously isn't. But the fight is closer than many realise, and Android has managed to win a number of key battles.

Here, then, are five ways in which Android beats iPhone on the ol' gaming front. 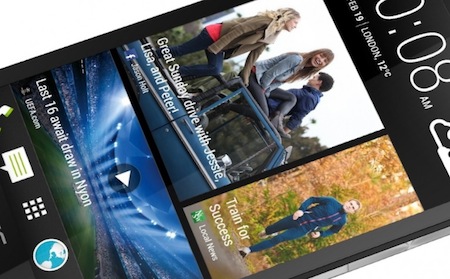 You might find that when it comes to all-round smartphone usage, a 4-inch screen is best. There's a lot to be said for being able to slip your phone comfortably into your pocket and operate it with one hand.

But when it comes to gaming, there's no getting around the fact that bigger is better. When tearing around a track on Real Racing 3, we'd take the 4.7-inch HTC One over the 4-inch iPhone 5 any day of the week, because it simply shows more of that gorgeous 3D action.

Similarly, we'd rather play Angry Birds Star Wars on the larger phone because you get a better view of the action with less need for zooming in and out.

We'll say it again - the iPhone is the best gaming smartphone around, mainly due to its massive range of top-tier games. But it's an exclusive club.

If you want to join, you have to pay out at least £529 for the latest model. How about last year's model? That'll be £449, please. Even the 'budget' iPhone 4 with its single-core processor (which some advanced new games don't even support) costs a considerable £319.

Conversely, as we pointed out recently, you can get yourself a multi-core Android phone capable of playing anything you throw at it for less than £200. Even the current official Android flagship device, the Nexus 4, with its quad-core CPU and 4.7-inch 720p display, can be had for just £239.

The iPhone has more high-quality games than Android (though the gap is closing), but the actual experience of shopping for games is more pleasant on the Google platform.

The Google Play Store is brighter, quicker, and better laid out than the App Store. There's a crisp front page with a prominent 'Games' tab, and within this there are neatly delineated categories for featured games, top sellers, free games, and categories.

Step into the info pages for a specific game and you'll get a brilliant preview video to show you how the game looks and plays. I sorely miss this feature whenever I go from my Android phone to one of my Apple devices. 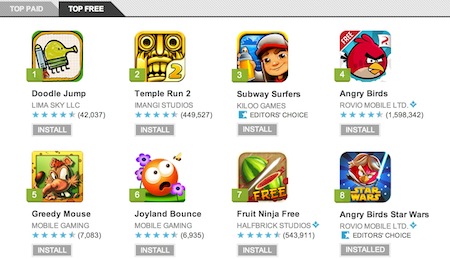 With the rise of freemium gaming on iOS and Android, this is less of an issue than it was before. The fact remains, though, that Android is packed full of free games.

It's always been this way. Android had an ad-funded version of Angry Birds way before iOS. This is because statistically iOS gamers are willing to spend much more on their apps and games than Android users.

Either way, coupled with those affordable handsets, Android is the place to be for pocket gamers on a budget.

The open nature of Android means that you can install a whole bunch of console emulator apps without any bother at all.

This opens up a whole new world of potential SNES, Mega Drive, Game Boy, and Sega Saturn games, among others. Think of a classic console, in fact, and you'll probably be able to play its best games on your Android phone with the minimum of fuss.

You want some examples? Read this.

Such options just aren't available to you on iPhone - not without the help of a jailbreak at least.