The anticipated fantasy farming sim Fantasy Town has officially soft-launched in Spain and Nordic countries today - overseen by Gamigo, its publisher in NA, EU, AU & NZ. It was previously soft-launched in select Asia countries, with legendary Free Fire developer Garena handling publishing in that region, After successful launches within the Philippines, Thailand, Malaysia, and Singapore, it has finally opened its doors to more gamers throughout the world.

If you haven’t heard of it, Fantasy Town is essentially a Stardew Valley or Harvest Moon-like game with a Minecraft voxel art style. This amounts to what actually looks like quite a cute little game, featuring mechanics such as farming, mining, taking care of animals, and looking after your village and its people. For those of you who want a little more combat in there, you’ll also be defending your village from trolls as well! 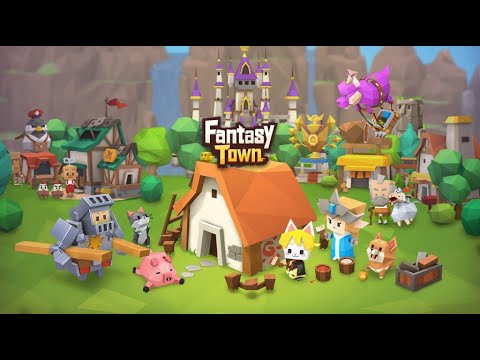 Fantasy Town sees you take on the role of a reluctant Lord who’s essentially forced by circumstances to take over the title’s main town, Arsendal, as the governor. From there, you’ll slowly become more and more open to the idea of taking care of the population of Arsendal as you construct new buildings for them, manage their farmland and crops, and government activities all in the name of making your new friends happy.

Of course, it’s not all sunshine and roses, as you’ll also be summoning new villagers throughout your time with Fantasy Town, who will then go explore the continent and dangerous dungeons in your stead. If you’re really lucky, they might even stumble across some rare treasure that will further assist you in building up Arsendal for your citizens.

If all of this town management meets dungeon crawler mix sounds good to you, you can check out Fantasy Town’s official website for more information. Alternatively, if you’re in any of the locations previously mentioned, you can find it on both Google Play and the App Store as well.

Enjoy taking care of your land and watching your harvest grow over time? Check out our Top 15 best farming games for Android devices!
Next Up :
Monster Train, the massively popular deck-builder, is coming to iOS and Android in the near future

Fantasy Town, gamigo's farming sim, is officially out on Android and iOS