The epic journey continues as popular mobile hero collecting RPG Exos Heroes collaborates with Tales of Vesperia of BANDAI NAMCO Entertainment Inc. fame. Running for two weeks until the 10th of March, the special collab will give players a rate-up chance to pick Yuri Lowell, Estelle, and Flynn Scifo along with their Exclusive Weapons throughout the duration of the event. 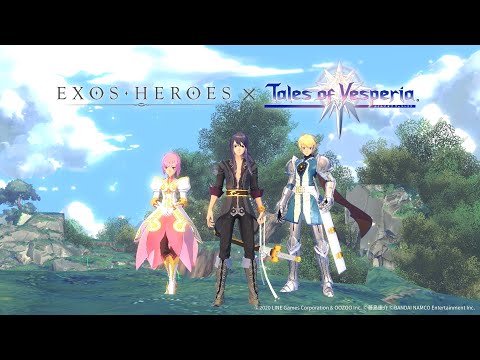 LINE Games also makes the collab event more engaging with a new Core Raid that features the cool new heroes for the whole event. As a Step-Up reward, Flynn Scifo can easily be collected by simply participating in the Core Raid.

To top it all off, the Exos Heroes X Tales of Vesperia character collaboration will also include a 7 Days Gift event plus a free Premium Recruit event, where players can take advantage of up to 55 free Recruits to keep the adventure alive.

You can find out more about the collaboration event from the Exos Heroes official Facebook and Tales of Vesperia official website.

What's A Preferred Partner Feature?
From time to time Steel Media offers companies and organisations the opportunity to partner with us on specially commissioned articles on subjects we think are of interest to our readers. For more information about how we work with commercial partners, please read our Sponsorship Editorial Independence Policy.
If you're interested in becoming a Preferred Partner please click here.
Next Up :
Cat Colony Crisis developer Devil's Cider Games has released a dev diary providing some interesting insights about their game