Exception is an eye-catching neon-infused platformer that pays tribute to classic games of the genre. It's available now on the Nintendo Switch.

Exception is set in an old lady's computer that has been hijacked by a virus called Titan. You'll play as an unnamed hero, who's a predominately orange chap with a cool blue sword, and must vanquish the invading virus before it crashes the system entirely.

Though Exception aims for an NES feel to its controls by keeping things simple and not weighing the player down with endless tutorials, it does add its own spin to proceedings too. Each level can transform once you hit these glowing green objects. The levels can rotate around, transport you to different sections and it even looks like you can make the level slap bosses in the face. 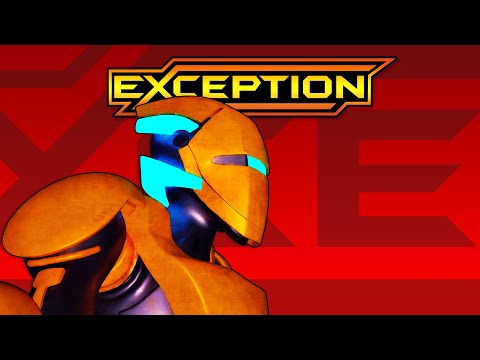 It certainly makes everything look incredibly manic. One moment you'll be running down a corridor left to right, the next you'll be platforming from bottom to top along the same path you just ran down. It's an incredibly stylish spectacle as the camera zooms in and out or twists and turns to show you how the map has changed. However, it might not be the best thing to play if you get serious motion sickness. The neon colouring and speedy transitions might be too much for some people.

As you progress through the game's 120 levels you'll find new special attacks to help slay your enemies. There are also 15 bosses to bring down in between all the platforming and decimating of standard enemies. The whole game will be complemented with its two-hour synth soundtrack. The developers wanted to have authentic-sounding synthwave so they teamed up with several modern-day artists such as Kalax and Waveshaper.

If you love a good synth track as well a classic platformer, Exception might be exactly what you need. It's available now on Switch for £10.99.