Evolution review -"A board game that's more than theoretically excellent"

Evolution, ironically, got designed by a process of selective breeding. At the core of the animal, there was once a numbers game, a skeleton of mathematical strategy. Over time it's gained muscles and skin of such rich theme that you can hardly tell there's a hard core underneath. And better, both work in perfect synergy to deliver a satisfying board game adaptation.

We say board, but really Evolution is a card game. Each turn you'll get a hand of trait cards, which you can play to evolve your animal. Long Neck gives you a free plant food, for example, while Hard Shell protects you against predators.

One you have to play into the middle, where its number value contributes to the food available. The others you can use for their traits or discard them to create a new animal or to grow the population or body size of existing species.

After the card play, you can see a peek of that numbers game under all that hide and fur. Species feed, taking one food at a time, in turn order, needing as much food as their population size. So it's a balance of trying to make sure you can feed all your animals while denying as much as possible to your opponents.

This is trickier than it sounds. At the end of the game, you'll get points for all the food you've eaten, plus bonuses for evolved traits and body size. So everyone's racing to grow their herds to gobble up as much as possible. But just like real life, the habitat can only support so much. Pretty soon the voracious animals will want more than the food cards each round can provide.

Traits can help you here. Some let you snaffle more than one food in one go. Others are positional: Co-operation, for example, allows a species to the right of a feeding animal to also snaffle a food.

Working out what to contribute to the food pile while keeping your creatures alive is a compelling see-saw. You'll need to work with the trait cards you're dealt while leveraging turn order and second-guessing other players to survive. It's trickier than population genetics. 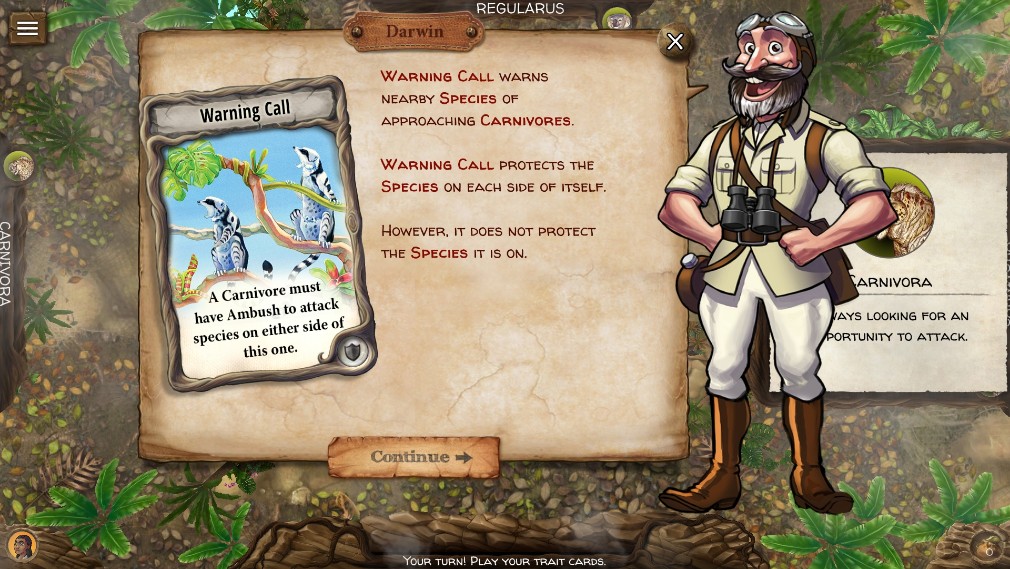 If there's not enough plant food getting played into the habitat, though, there's a whole second strand of strategy to explore. One of the trait cards lets a species turn carnivore. Now it no longer eats the plant food, leaving more for the herbivores to munch. Instead, it munches on the herbivores themselves. A successful carnivore allows you to literally eat the opposition alive.

Of course, there are catches. To eat a species, the Carnivore must have a higher body size than its prey. And there are various defensive cards like Horns, Shells and Herding that you can play on a herbivore to keep it safe. None of the rules are complex, yet what emerges is an astonishing picture of real, if simplified biology in action. An arms race between predator and prey, governed by the iron laws of food supply.

Add in meat-eaters and the full range of traits, including Intelligence, which modifies other traits, there's lots to think about. Yet the random card draw and ever-changing environment forces you to think on your feet. After a good few games, though, the lack of positional strategy and limited variables does begin to show. As does it's limited graphics palette and visual design.

At that point, Evolution still has plenty of mutations left to surprise you. There's a single-player campaign to enjoy, a feature still too often lacking in board game adaptations. Success there unlocks new toys to play with, including more difficult AI levels to challenge you as your skill grows.

You can test your skills online, too, against other human opponents. The interface for starting games is limited but functional, tipping you into a pool of other potential players until you're all ready to go. You can start private, password protected games with your friends if you like, too.

Evolution boasts all the features you'd want in a modern board game adaptation. And as a bonus, the physical game is a bit awkward with cards cluttering up the table. Having them tarted up as animal feet onscreen in much neater. And it completes the illusion that the mechanics so ably create: a living, breathing ecosystem on your phone.

Evolution review -"A board game that's more than theoretically excellent"

A fully featured, if occasionally sparse, strategy treat that doubles as a simple biology simulator
Next Up :
Otaku's Adventure mobile review - "A truly bizarre love triangle"