In 2014, an unassuming little roguelike arrived on the App Store. Hoplite made quite an impression, its deceptively complex gameplay praised by critics and other developers alike.

It's fitting to compare Enyo to Hoplite, especially considering that the former was specifically inspired by the latter. Both were expanded from game jam prototypes, feature ancient Greek themes, and revolve around tactical gameplay with a healthy dose of shield bashing. But TinyTouchTale's roguelike isn't a copycat to be dismissed, but a challenging addition to the genre with its own unique style of gameplay and aesthetic.

The goddess of war must descend ten floors to retrieve a trio of legendary artifacts; that's your motivation to enter Enyo's deadly arenas. Between the titular heroine and your three goals lies a menagerie of foes: the spear-wielding wardog, the charging minotaur, the hovering medusa, among others. Each enemy presents a different challenge to outmaneuver and overcome, from the ranged arrows of the centaurs to the bombs of the gatormen. Move without care and you'll likely find yourself cornered or within a fatal crossfire or knocked into a lava pit. 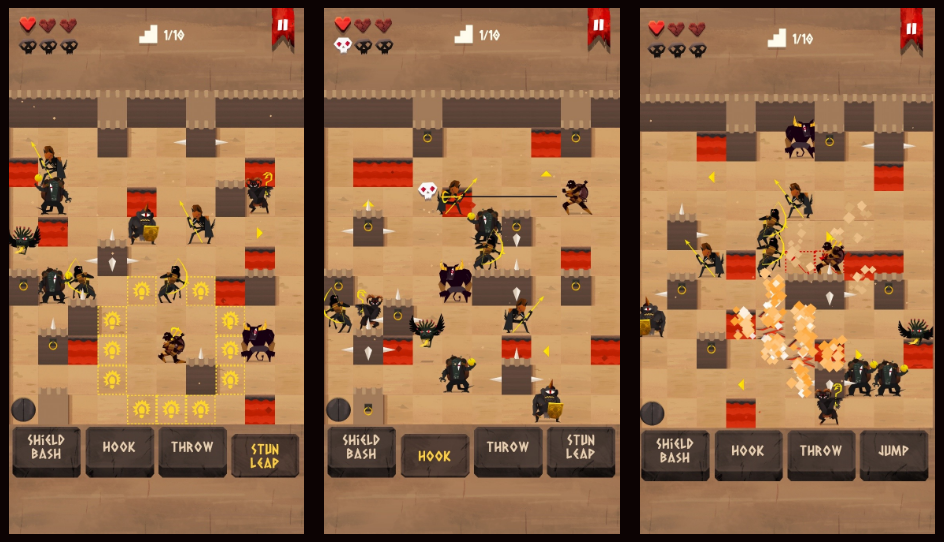 However, you are armed with merely a shield and hook. In fact, you have no offensive moves at all, nor are there upgrades or skills to unlock. Within any other roguelike, the inability to attack directly might seem like a disadvantage, but in Enyo, it means the environment becomes your weapon. A shield throw or bash can knock an enemy into a waiting spike, while a hook throw can pull one into the lava behind you.

The art of war

Your individual moves are effective, but the synergy between your moveset, enemies, and the arena is what gives Enyo its strategic depth. A thrown shield can be retrieved with your hook, opening the door for risky shield throws to knock enemies into hazards. The hook-wielding satyr can pull you across the arena, offering a mean to reposition quickly if there are no wall rings to grab. A thrown bomb can be bashed away, or allowed to explode and damage the floor tile. Cause an enemy to step on the broken floor and they'll tumble into the lava below.

Using these moves in conjunction and effectively makes you feel like a masterful warrior, wielding some lost art of armed judo that turns enemies' strengths against them.

But despite the tactical depth, there were times where I felt a death came unexpectedly, such as being stunned repeatedly without a chance to escape. While a more effective strategy may be able to avoid situations like that, it can be frustrating experiencing moments like that before you have the prowess to avoid them.

Enyo offers a great deal of strategy through its blend of tools, traps, and foes, but the lack of upgrades or significant means to may cause the game to become repetitive once you've mastered its tactics.

Ideally, the game's Daily Challenge mode, complete with a unique enemy - the Mimic equipped with a random set of abilities - can offer longevity for fans of this unique roguelike.

A smartly-designed challenging roguelike that eschews the usual means of action in favor of tactical use of the environment and enemies
Next Up :
Alien: Isolation review - "Chestbursting fun in the palm of your hand"