Following in the footsteps of fellow cult classic roguelike The Binding of Isaac, Dodge Roll and Devolver Digital's Enter the Gungeon has shot onto Nintendo Switch.

The title casts players as one of four gungeoneers, gunfighters tasked with exploring the Gungeon in hopes of finding a gun that can kill the past.

Levels are randomly generated with progressing difficulty, with death taking users right back to the start of the game. If you've played a roguelike before, you know what to expect.

Combat is centered around, well, shooting things with guns. Often these things are bullets. Yep, you get to shoot bullets with bullets. Enemies vary from anthropomorphic ammunition to gatling gun-wielding birds, magicians, iron maidens, and more.

Foes often boast powerful attacks, but fortunately the player character has an agile move set that lets them handle such encounters. Central to this is the dive, which sees users dodge out of harm's way Max Payne-style. 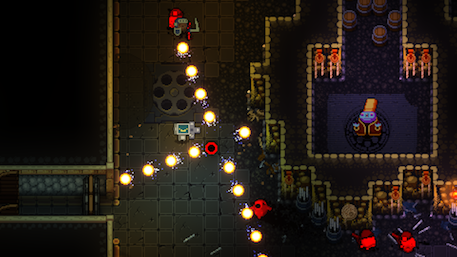 Add onto that the ability to create cover from some items in the environment, like tables which can be kicked over, and gamers are able to turn a situation where they are outnumbered and outgunned in their favour.

There's a huge variety in the arsenal on display, too. Much like the levels, items are randomised and soon players will be using T-shirt cannons, snowball guns, lasers, ants, buzzsaw guns and bow and arrows. That's on top of a number of fun weapons and enemies that reference other video games and films.

Perhaps the thing that stands out most is the art style. Yes, it's an indie game that employs pixel art, how original. But seeing Enter the Gungeon in motion is a sight to behold with fun, exaggerated animations for enemies and the player character alike. 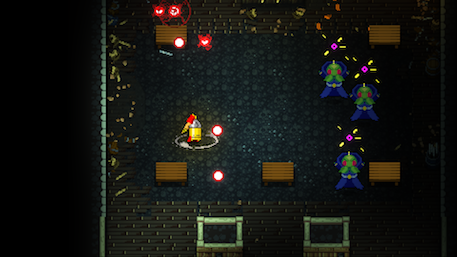 The attention to detail is, frankly, absurd, too, with debris filling the screen during shoot outs as bullets impact on the environment.

Despite all this added detail, Enter the Gungeon runs at a smooth click, and during our time with the game, we didn't notice any slowdown at all.

Add into this some wonderful sound design and music, and some tight and legitimately hilarious writing at points, and it's hard to not recommend.

This version boasts some new features, such as co-op and a number of Nintendo-inspired enemies and items, which are the cherry on top of an already excellent package.

One thing to note is the default control scheme didn't sit right with us, but fortunately there are alternative options, as well as the ability to remap buttons as you see fit. This is part of an admittedly pretty in-depth options set-up that is likely routed in its PC origin.

If you want something to help distract you from your loved ones this Christmas*, there are worse ways to do so then splashing out £10.99 on what is one of the best indie games on Switch right now.

*PocketGamer does not take any responsibility for damage incurred by you choosing to play videogames over spending time with your friends and relatives at this, or any, point in time.

A wonderfully violent, often hilarious roguelike that's a great addition to any Switch collection
Next Up :
Evony: The King's Return review