Last shots to be fired on 25th May

Over the weekend, ngmoco’s free-to-play iOS classic Eliminate was eliminated from the App Store.

But the game's disappearance goes much deeper than the loss of the app. 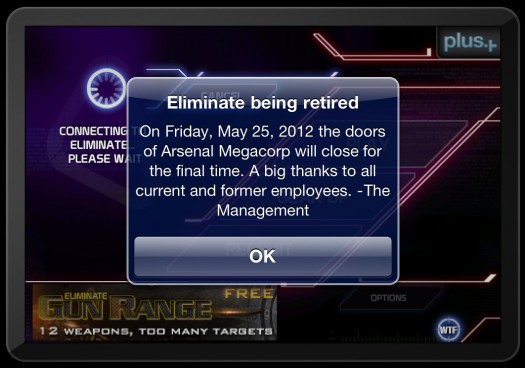 This news will bring to the world of mobile gaming a sting familiar to PC and console MMORPG players. When an online game closes up shop for good, there's no going back.

Older console games can always be booted up or converted into ROMs by the more enterprising gamers of the world, but the end of an online game causes it to literally cease to exist.

Of course, with ngmoco now focused on its new release Skyfall, it makes some sense for it prioritise its resources. Still, it's sad to see the old game go - even if like us, you haven't played it for a long while.

New version of Eliminate, including co-op mode, coming to iPad