You can be my wingman any day

Watching E3 it's easy to think the 'Year of VR' is finally here. Doom is coming to VR, Fallout 4 is coming to VR, Resident Evil 7 can be played from start to finish clad in a PlayStation VR headset, and someone has stolen the ideas behind Artemis Bridge Simulator and slapped the Star Trek license on the front.

It's an exciting time for VR, that's what I'm saying.

Sadly, it's not all good news. Eagle Flight's multiplayer demo at E3 2016 has proven that for all of the hard work and collaboration many developers are putting in, some people still just don't get virtual reality. Let's take a look at December's Eagle Flight reveal trailer first. It's pretty good. 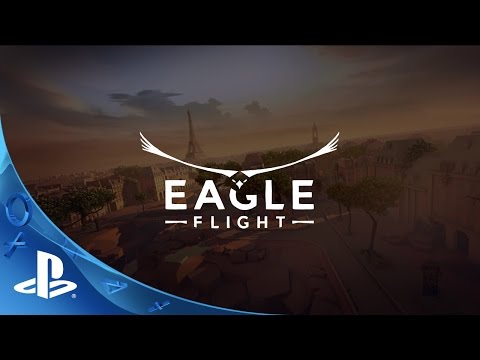 Here we're shown something thoughtful and almost meditative. You're an eagle, you're soaring, and you can appreciate the overgrown Paris below you as you pirouette lazily in the sky. There wasn't really any gameplay at this point, but how can you mess it up?

Let me tell you how. Capture the flag. Okay, so the flag is a rabbit and the goals are nests, but the core conceit is the same. Watch this E3 2016 footage of a multiplayer face-off between two teams.

This shows us a lot, and none of it’s good. Firstly, the eagles appear to have guns and can shoot each other.

"Damnit Steve, why didn't you tell me Miniature biplanes don't exist?" they'd say, before congratulating themselves on a job well done.

I know that this is on a conference stage so it's not a perfect representation of the game you'll be playing at home - I suspect very few of us will be murdered by Palmer Luckey, his whooping echoing like a different type of eagle down the voice chat, but it also shows how little game developers get VR games sometimes, and how they need to fit the new technology into pre-existing notions of what a multiplayer game "should" be.

It's mostly the guns that jar, to be fair. Why do eagles need guns when they're already one of nature's finest killing machines? Surely they'd just pounce on the other eagles from above?

Sort it out Ubisoft. You can do better.