Gameloft seems to be on a iPhone roll at the moment.

It's done urban free-roaming with Gangstar: West Coast Hustle, urban warfare in Modern Combat: Sandstorm, some sort of beat-'em-up with Blades of Fury, and now role-playing games with Dungeon Hunter.

As the first video footage shows, the gameplay is a typical top-down action RPG, with a virtual D-pad for movement and touch buttons for fighting and magic.

The game also follows proper RPG protocol with hit points, and character stats, levelling up, and the collection and equiping of hundreds of items that will change how your character class' plays.

The three options are:

Warrior, whose main focus is strength, can take on many opponents at once and can wear the best armour.

Rogue is agile and so doesn't need heavy armour. Dexterity is his skill.

Mage uses magic, employing an energy shield for protection or to repulse enemies. His skill is energy.

You also get to choose a fairy helper, who as well as providing advice works as an element power-up by providing offensive and/or defensive spells. 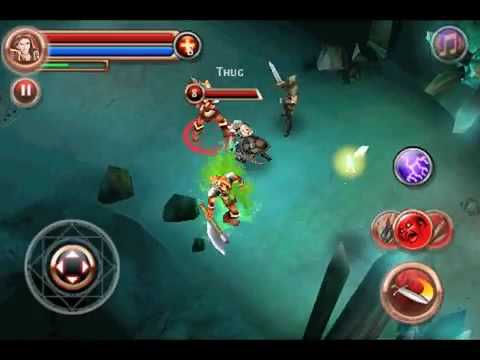 Dungeon Hunter looks like it will be out before too long, and we reckon it will cost $6.99 or £3.99 as Gameloft's other premium games have done.

You can follow more news via its RPG twitterfeed.