Woo-oo - DuckTales: Remastered pogoes onto iOS and Android for $10

Life is like a hurricane here on the App Store as just days after it was teased, WayForward's cartoon revamp of classic NES platformer DuckTales is now available on iOS and Android.

You play as money-hungry miser Scrooge McDuck, as he bounces on his pogo stick cane across levels set in the Himalayas, Amazon, Transylvania, African mines, and the Moon.

You might solve a mystery or rewrite history or, better yet, whack some fool in the face with your walking stick. There are boss fights, upgrades to find, and tricky gameplay right from the NES era.

But, this is obviously no 8-bit game. The visuals have been replaced with hand-drawn sprites and painted backgrounds and the chiptune music swapped for a traditional score. Plus, there's voice acting and extra story stuff. 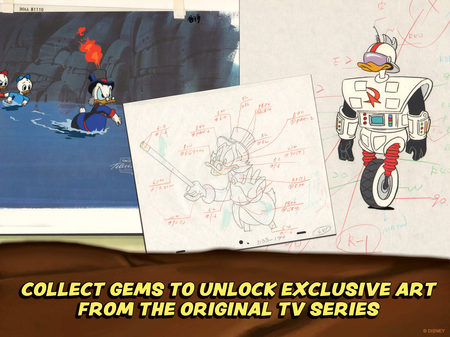 This mobile version features controller support. If you don't have one and are wrestling with virtual controls, you might want to stick with the new easy mode.

DuckTales: Remastered could be coming to smartphones based on this tease from Disney