Don't Eat Us is a mash up of an auto-runner and a tapper. It's a little rough around the edges, all told, but there's still fun to be sucked out of it.

The controls are simple, and the art-style is pretty slick. It's got a spooky vibe to it, as you might imagine, and while it won't stick around on your home screen for too long, it'll keep you entertained while it does.

The trio run along in the centre of the screen. They're assailed from the left and right by a variety of spooky creatures. It's up to you to mash the screen and kill them before they can eat the kids.

There are zombies and werewolves, and they sprint in with slaughter in mind. There are wagons too. These won't kill you, but they contain the bodies of fallen children that can regenerate your crew if one dies.

Then there are orbs to collect, and souls to gather. Then you've got swipe powers, which can protect you from multiple enemies at the same time. 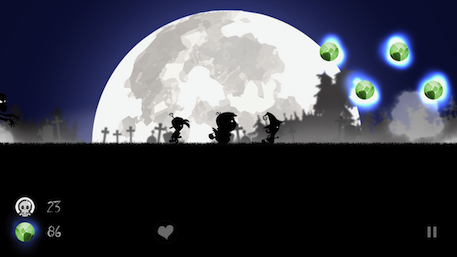 Everything just sort of rolls along. You're smashing things, watching them explode, and trying your best not to let your kids die.

There's no real progression here, and once the spark of original interest has worn off, there's not all that much here to keep you coming back.

That's not to say the game isn't worth picking up. You're going to enjoy the first few hours you spend with it, and that's more than can be said for a lot of games on the App Store.

No, it's not the most original game out there, but there's enough going on here, and enough new ideas, that you're not going to begrudge it too much.

It could do with a better progression system, and to tell you about some of its deeper mechanics, but there's still enough here to recommend it.

Escape zombies, wolves, and ghosts in the side-scrolling runner Don't Eat Us, launching on iOS tomorrow